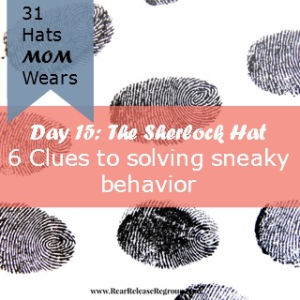 I received a letter from the kindergarten teacher that my daughter had been lying at school.

Mortified, I inquired on the full story, which turned out to not be nearly as serious as I thought.

I would have said no too at age five, had the teacher asked me that right on the spot.

However, it clued us in to a trait which we would have to keep a pulse on.

Seasons arise in your children’s lives where you will find the need to investigate sneaky behavior.

(Plus, I’ve always wanted to be one of Charlie’s Angels.)

After all, our kids are born with a sin nature (and you were no exception to this rule).

I found out this applied to every single one of my kids.

If your kid shows up at home with something new and he just came from a friend’s house, you may want to look further into it.

It’s very easy for them to reason that they need a certain toy that belongs to someone else – even if it’s a plastic pea.

when I was about five years old, my grandma and mother took me to visit friends.  I adored my playmate’s plastic food, and upon leaving for home, I decided to swipe a pea and make a run for it.

I scrambled to the car, home free – except grandma was taking too much time with her goodbyes.  She almost stepped in the car when my little friend ran out of the house screaming, “SHE TOOK MY PEA!! SHE TOOK MY PEA!!!”

To which I promptly shoved it down into a crack behind my seat, never to be seen again.

They questioned me at length about the pea, but since I didn’t have it on my person, the dogs were called off and we went home.

I felt extreme guilt about that pea.

Fast forward 30 years to my own daughter playing at a friends house.

Our kids have our sin nature.

Even little things need to be dealt with, because kids have a tendency to grow, and so do their carnal urges.

So your daughter has a boyfriend.  Lovely.

Keep your eye on her.  If she’s acting suspicious about anything, don’t be afraid to get out your magnifying glass.

We’ve been known to search our kid’s rooms.  We’ve also tailed them in our car when they were unaware.

They are your charges.  Don’t be afraid to search the premises if you suspect foul play.

This even includes diaries, if necessary.  Granted, that would be an extreme measure, but at some point, you may have to do it.

(Plus, I always wanted to be Farrah.)

3.  Make the punishment fit the crime 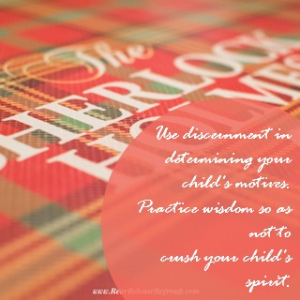 The lying kindergartner received discipline, but we didn’t come down hard on her.  She was only five.

Direct disobedience needs to be dealt with, but use wisdom so as not to crush your child’s spirit.

Discipline in love, but resolve to have a forgiving spirit.

Use discernment in determining your child’s motives.

The pea thief never stole again.  Stealing just wasn’t as fulfilling a fault as say – getting your brother in trouble for stuff you did.

Once in a while, have your child hand over her phone.  You pay the bills, right?

Even if she pays her own phone bill, you do pay for her life.

Monitor all electronics and tvs.

Don’t be so distracted that you miss any important signs.

Remember, you are the protector.  No one else will do your job.

(Did I mention that I always wanted Farrah Fawcett hair?)

If you know your son has a propensity for stretching the truth, by all means, keep an eye on that.

If your daughter likes to push the limits, remain firm.

Study their character and discipline accordingly. No two children are alike, and they all need direction in different areas. Click To Tweet

Some kids are more complaint than others and give you no reason to suspect.  I’m not saying accuse them if they’ve not given you a reason.

Also, if your child’s personality is more like yours, he will likely struggle with the same things you do.

Be aware of your own struggles so you can help him with his.

(I was always prideful about my hair.)

That would be your husband.  He is your helpmate!  God partnered you with him for a reason.

When my kids hit the teen years, Jim and I did a role reversal.  He became the ever suspicious one, and I was the more lenient.

This was due to his background.  He knew how teens could act and what mischief they could sow.

For this reason, he was ever on his guard.

Collaborate on a plan

We had many a disagreement over parenting techniques during this stage of the game.

But you know what I found out?

My husband has an uncanny sense for judging character.  It runs in his family.  He and his brothers can sense a skunk a mile away.  One of his brothers is a detective.  It’s in their blood.

Learn to appreciate the traits of your mate.

(Sometimes I pretended he was Charlie and I was Farrah.)

Don’t let the kids get wind of your disagreements if you can help it at all.  They will try to pit one of you against the other.

It’s going to take all the partnering you’ve got in order to get through the teen years.

You have a right to search the premises.  You pay for your home, their clothes, and their lifestyle.

“But I don’t want to lose their trust!”  You lament.

Please let me give you some advice that I learned years ago.

You are the mom, not the BFF. There will to be times they hate you. That's because you're doing your job. Click To Tweet

Don’t worry, they’ll come back around when they grow up.

The one in charge here is you, and for good reason.  You have been around the block a time or two yourself. 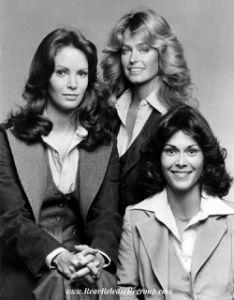 Be the detective when necessary.  Notice the clues, make regular inspections, make the punishment fit the crime.  Monitor their habits, their character, and their space.  Grab your partner and do a search if necessary.

Protect those precious charges God has given you – they’re not mature enough to do it on their own.

Own that Sherlock Hat.

After all – it’s Elementary, my dear Watson.

{Hey!  Pssssst!  Over here!  It’s me again – pretending to be Farrah.  So listen.  If you’re a mom and you need some encouragement and advice on rearing, releasing your child, or regrouping after he’s left, why not sign up for email over at the top right hand corner, just underneath the “31 Hats MOM Wears” picture!  The series runs every day this month.  After that, I’ll settle back down to my regular 3 times per week schedule.  If you would like to contact me, you can do so here.  I’m so very glad you stopped by!

Previous Post: « Day 14: The Graduation Cap – How to choose an educational route for your kids
Next Post: Day 16: The Santa Cap – 6 ways to plan your family Christmas traditions »