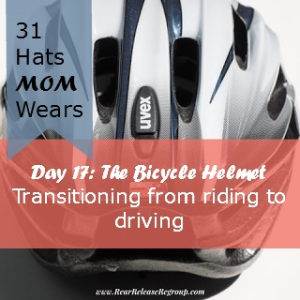 Everybody knows you teach a kid to ride by letting go of him on a hill.  A slight hill.

Preferably in the grass.  With you hanging onto the back of the bike.

Because that’s your baby.

But you have to let go in order for them to learn.

Scary thing is – it doesn’t stop with bikes.

Eventually, you have to teach them to drive.

Since this is inevitable (and I taught four kids), I offer a bit of driver’s education for parents who are either in the throes, or have yet to participate in this  joyous occasion.

If you’re lucky, they may fail the permit test.  Maybe even a couple of times.  Or three.

Although it upsets them, this buys you more time.

By the same token, it’s a pain having to revisit the DMV numerous times.

It’s the unhappiest place on earth.

Nobody who works there smiles, and you just want to get out quickly because everyone’s scary.

But you never get out quickly.

Eventually, the kid passes, and you move to the next level:

Teaching them to drive

Now you can panic.

I never saw my dad lose his cool until he taught me how to drive.  A stick shift.  Around an old baseball diamond.

And jerked his head just as many.

1.  Be ready for the graveyard shift

They need to be able to drive slow at first, so there must be as little traffic as possible.

I’m not kidding about the cemetery.  We did all of these.

2.  Teach them that curves are a real thing

You people who reside in Iowa may not realize this, but we have mountains here in West Virginia.

Because you can’t go through a mountain.

My kids bring their flat-lander friends home from college and they don’t know how to act when they come up on a curve.

How to navigate a curve:

Let off the gas before the curve

Apply gas halfway through the curve

Right your wheel when you come out of it

Move your hands when turning your wheel, they’re not super glued to it.

3.  Be ready to relinquish all your time for a while

May as well face it –

you'll have to spend time riding around in circles to places you don't really need to go. Click To Tweet

It’s necessary before they get into traffic.

We rode over the same mountain four times one day just so my daughter could practice driving to babysitting.

4.  Let them drive places you actually have to go

So it begins, a little at a time.  I was probably more cautious than some, but my heart could only take so much.

Eventually they improve.  Some catch on more quickly than others.

Every time I taught a kid to drive and they neglected to apply the brakes quickly enough, took a curve too fast, or braked too hard, it happened.

Everyone in the car got nervous.

My other kids never wanted to ride with the older sibling learning to drive.

For obvious reasons, but especially “THE GASP”.

Try to keep a lid on it. 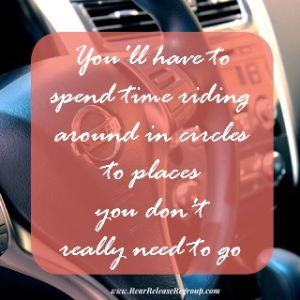 It’s possible that they will not pass this test either.

Especially if you haven’t taught them all the basics – such as the location of the hazard lights.

I’m not saying it happened in our household.

I’m just saying – it may have happened to a friend of mine’s kid.

-Make sure they check their mirrors regularly

This is an essential skill.  The driving instructor will be looking for it.

-For the love of Pete – get the birth certificate, proof of residency, and anything else the DMV requires.

Believe me, you will be super annoyed if you take off work early to get your kid out of school and you discover, upon arrival, that she does not have all her information.

You pray the whole time until you receive a text that they've arrived safely at their destination. Click To Tweet

-Let out the rope a little at a time

Don’t just set them free to drive all over creation right off the bat.  They’re not ready, and neither are all the other drivers out there.

It’s the logical place.  Once they master that, slowly let them broaden their horizons.

Just don’t.  Why would you even?  Use common sense on this one.

-Be a good judge of character

You’ll be able to tell if your child takes to driving easily or not.  Some possess inherent good sense and judgment.

Some have to learn it.

I had both kinds in my household.

Set down strict rules for this.  If you find out they’re looking at their phone, you will need to suspend their use of it.

Also – did you know you can track their whereabouts with google maps now?

Take advantage of that sucker.  Where was that when I needed it?!

Be prepared for dumb stuff to happen

“Never lend your car to anyone to whom you have given birth.”  ~Erma Bombeck


When your kid comes up the driveway with her rear view mirror knocked off and the whole side of her car scraped, you might want to teach her not to back into the driveway beside the mailboxes.

The mailboxes that are now flattened beside the road.

-Do the best you can to keep your cool

The cool was not kept by one of the parents.  The other parent felt sorry for the spazzed-out kid.

-Be thankful it’s not worse

Another kid had an encounter with a telephone pole while backing up.  There was also a connection with a cement wall.

-Make the kid pay for the damage

If the damages are purely cosmetic and the kid never gets enough money for the repair because she’s in college and uses all her money toward that, the dent may stay.

Which is what happened with the telephone pole dent.

-WHEN the kid gets a ticket, THEY MUST PAY FOR SAID TICKET

This is non-negotiable because they have no business getting a ticket in the first place.

But they will.  And some don’t learn after the first one, either.

So you there – taking the training wheels off your helmeted 6-year-old’s bike and walking her up that hill – be thankful it’s only a bike.  You’ve got less than 10 years to enjoy full possession of the car keys.  Enjoy that bike helmet while you can.

And you, gasping mom, sitting in the passenger seat mashing your foot on that imaginary brake – I’m feelin’ your pain.  Hang in there.  Find safe places to teach him to drive, freely give of your (precious little) time, use wisdom when giving road time, and brace yourself for the dumb stuff.

After all, in a few years they’ll be on their own and you can laugh when they complain about the outrageous cost of car insurance.