You are here: Home / Humor / FLOODS AND SNOWS AND EMERGENCY ROOMS – OH MY!

Hayley came home for spring break last week!  I always laugh at the term “spring break” because it’s nowhere near spring and we always have a snowstorm.

Last week was no different – only we first we had a flood (mounds of old snow + tons of rain), then the snowstorm.  Needless to say, we spent a lot of time at home together.

I’m still getting used to the fact that things are not the way they used to be around here. 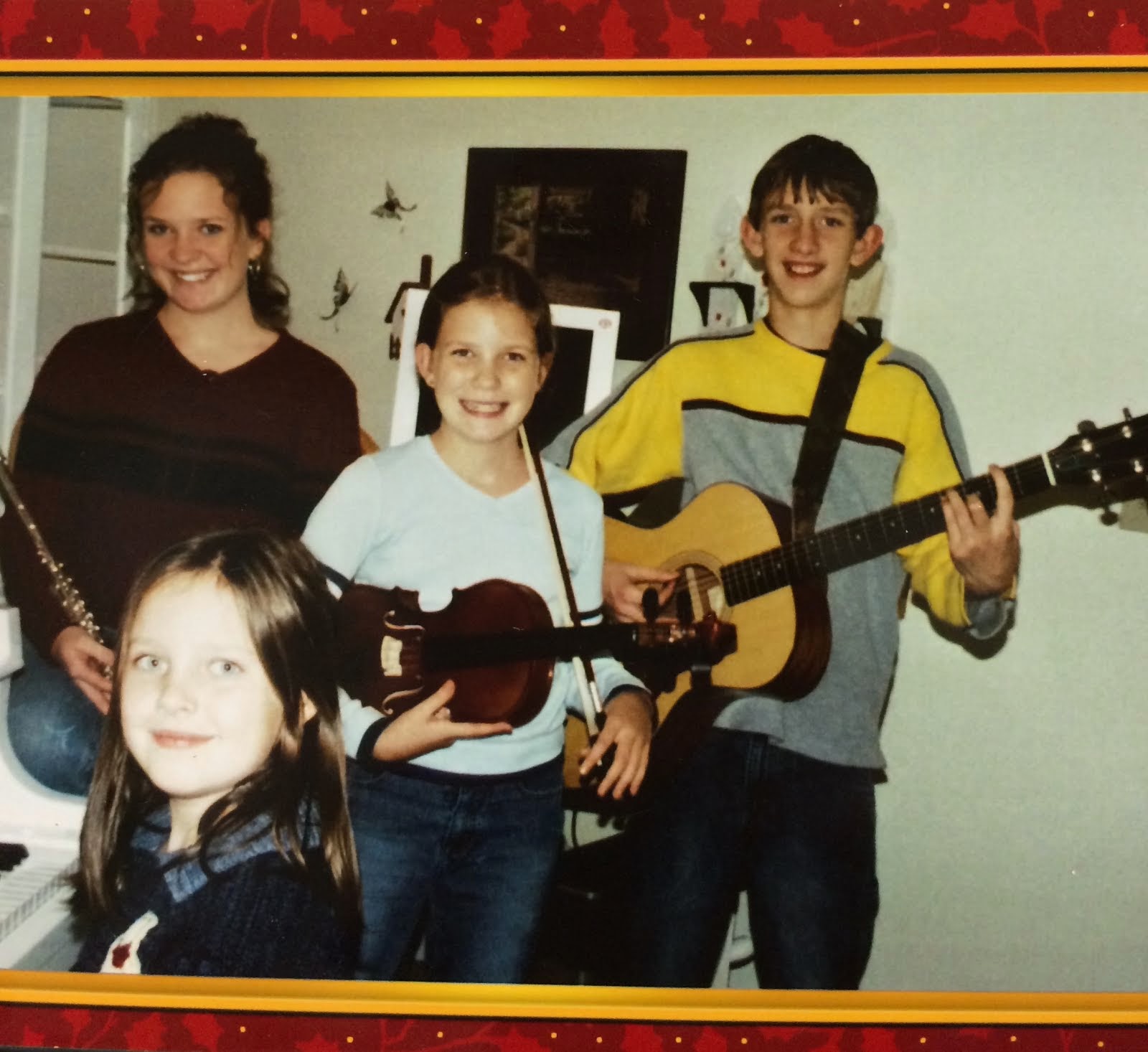 We don’t have these four together very much anymore.  (They are still musical though.) 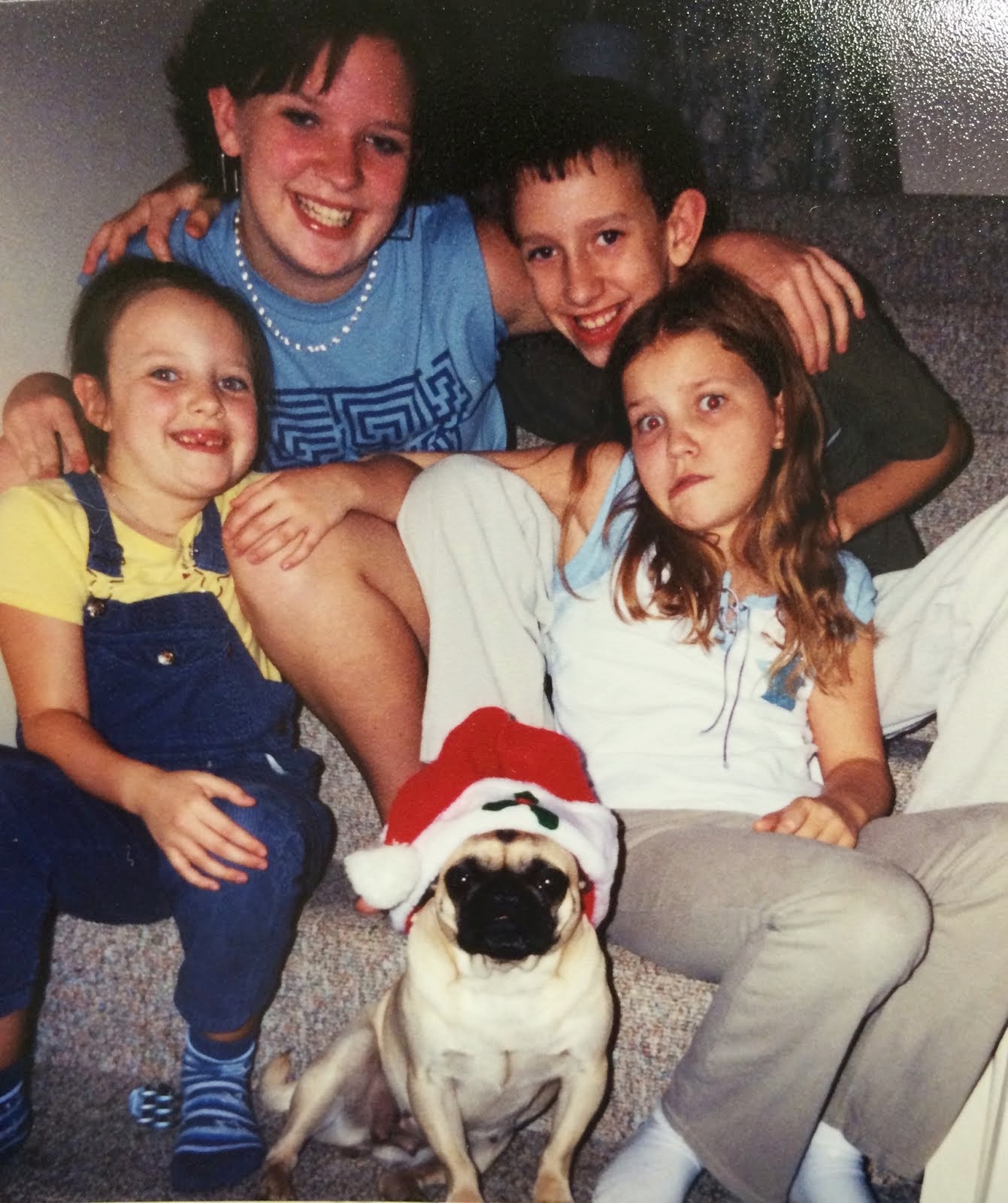 Except Hayley has always been the crazy one, so that hasn’t changed. (The dog did pass on a few years back – they are still sad about that.  Ah, Penelope.)

They also aren’t as young as they used to be. 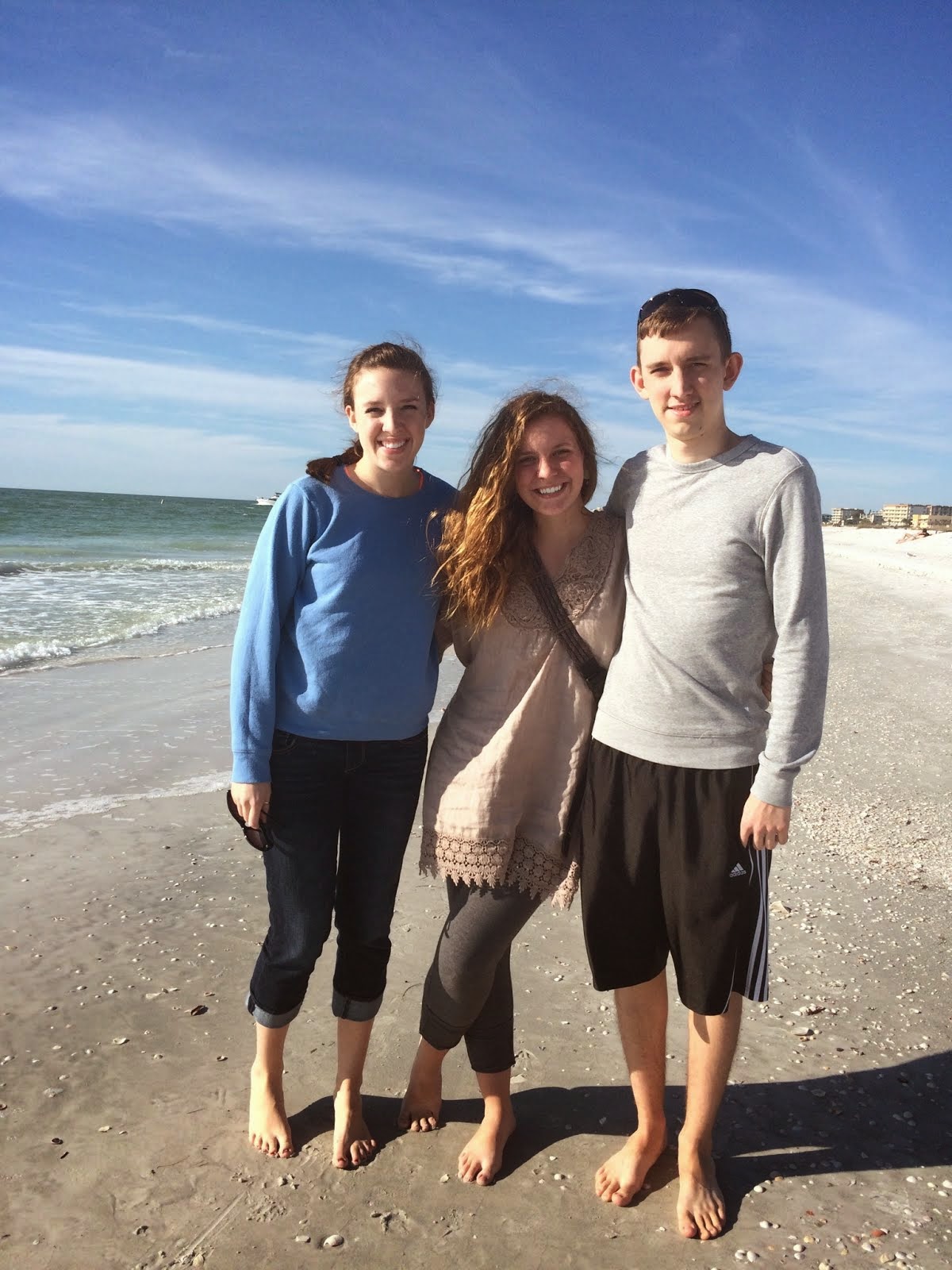 This pic was taken at Christmas time a couple months ago.  We didn’t get the privilege of having Nolan here this time.  (Sad face.)  I think there should be a national rule that all colleges “spring break” at the same time.  His break is in another week. 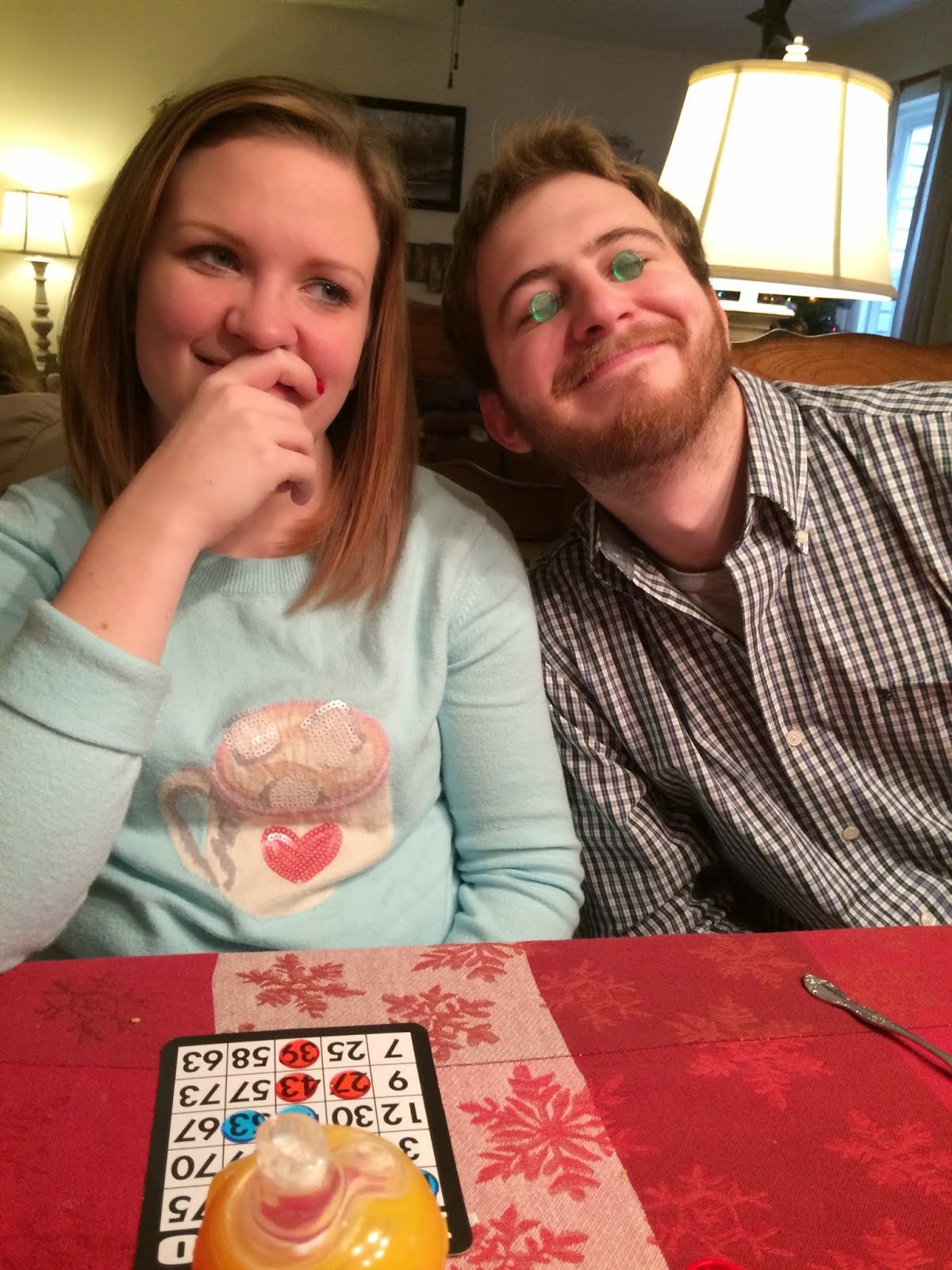 Also we have this guy around now – which is a good thing!  Taryn’s husband, Andy, fits right in as you can tell. 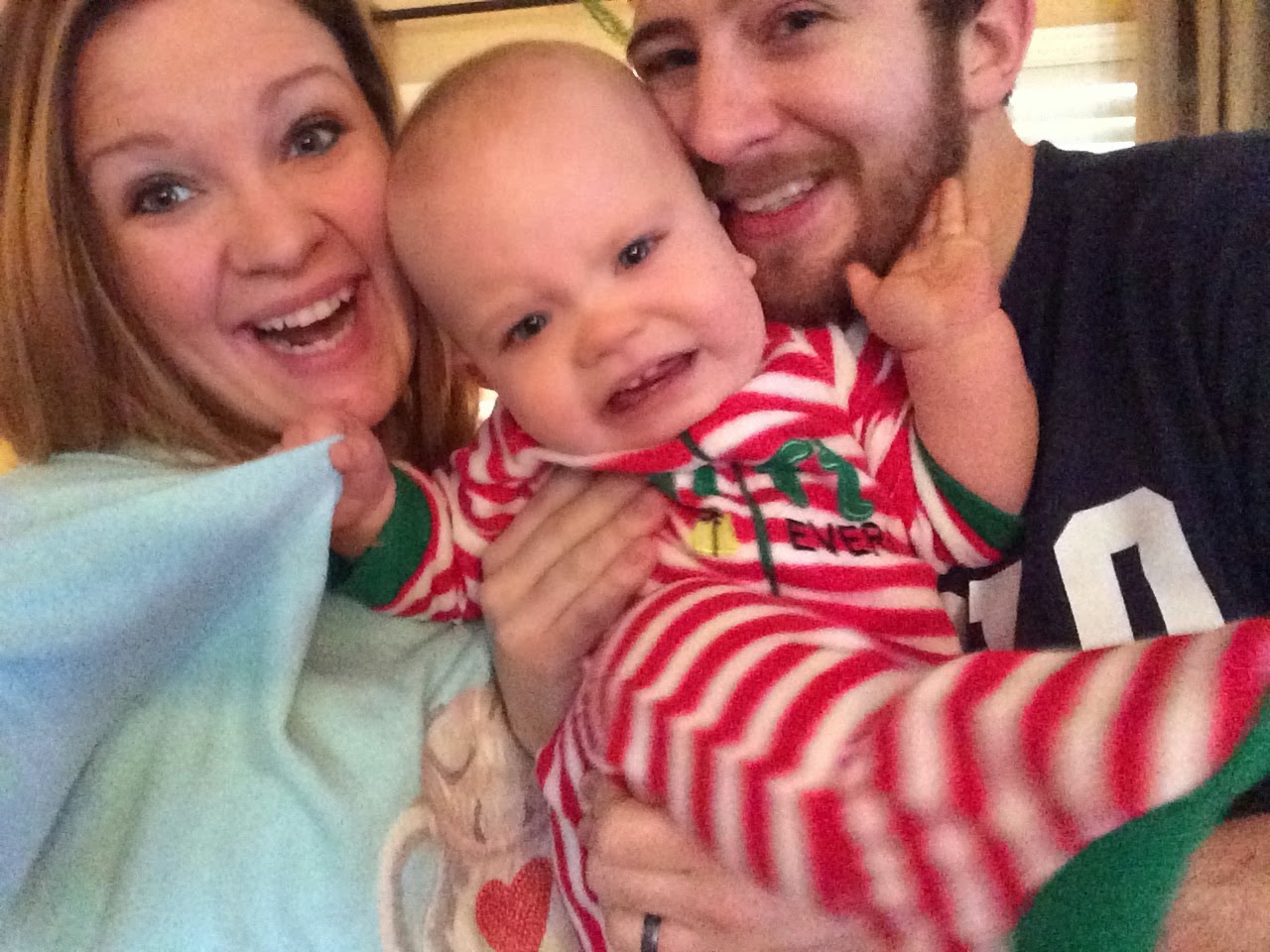 Plus we have Sawyer!  He’s usually happier than that, especially if you’re not forcing him to take a picture first thing on Christmas morning.

We do still have Kylie at home with us while she attends college locally.  But she misses her soul mate. 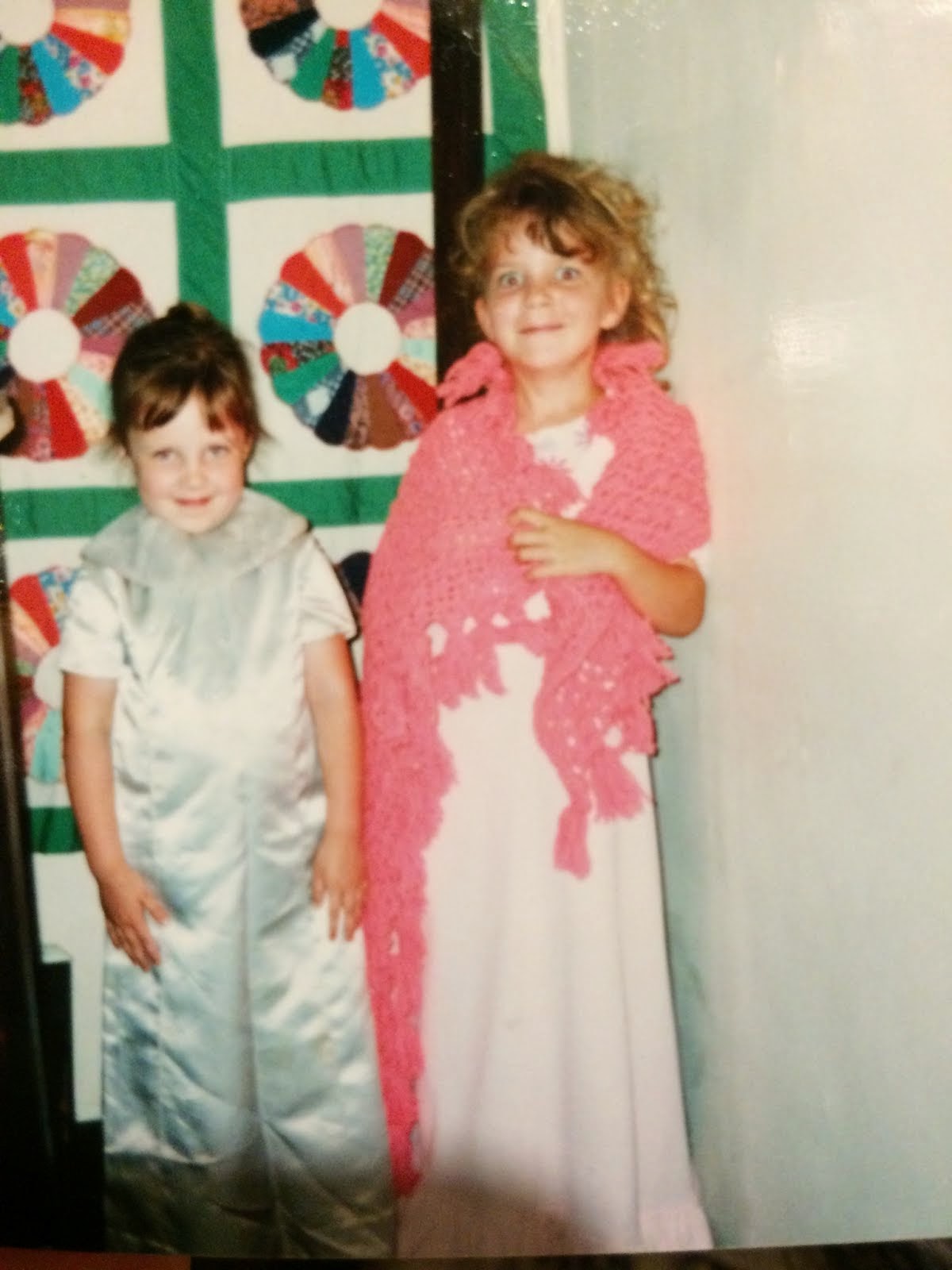 She confessed one day, “Hayley, when you’re not around, there’s a little hole in my heart that nobody else can fill!”  Awwwwww. 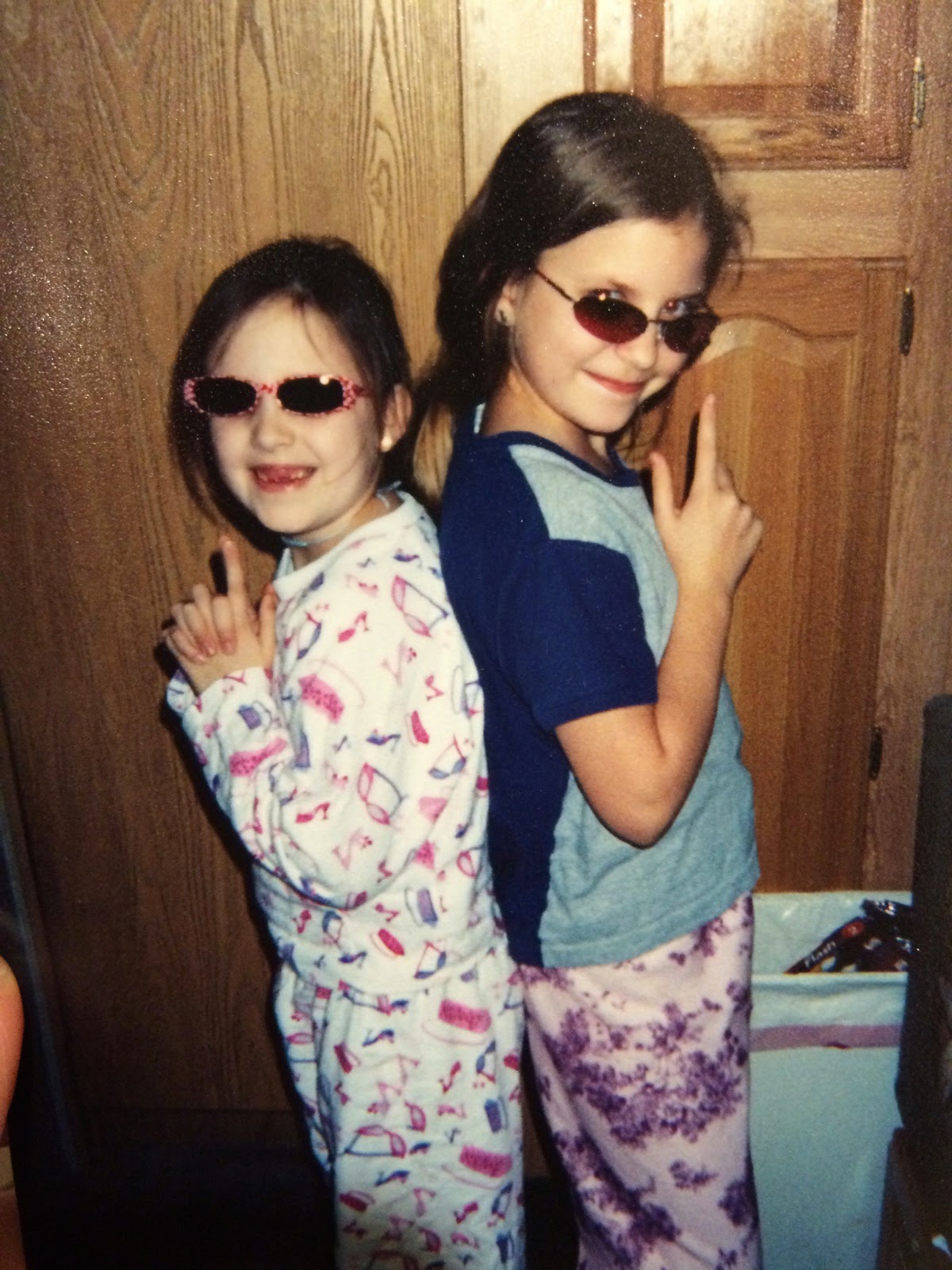 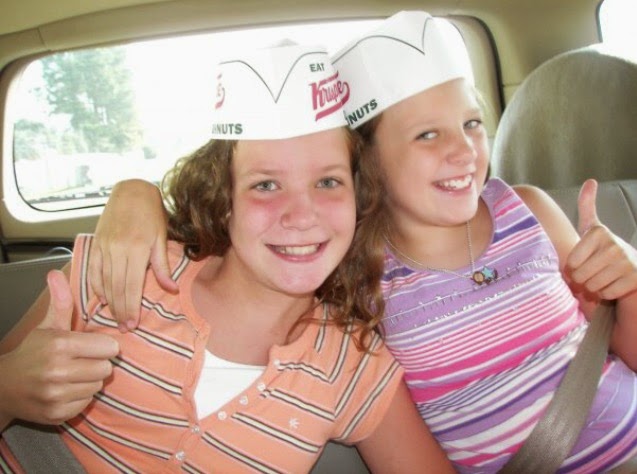 These two have always been like peas in a pod.  Like Forest and Jenny and peas and carrots.  The dynamic duo.  Mutt and Jeff.  You get the idea – where one was, the other wasn’t far away.  They were like a set of twins – born 2 years and 2 months apart.  Oh, my heart!

The first evening we found ourselves alone with Hayley because Kylie was at class (again with the college “spring break” – hers is the same week as Nolan’s).

We went through a drive-thru and while waiting I tried to explain to Jim the term, “turn down for what”.  Every once in a while I get ahold of a trending phrase and I abuse the heck out of it, usually without ever fully understanding it.  My kids are used to this by now, I think they view it as, “Mom’s got just enough knowledge to be dangerous”.  They’re pretty much right.

Unbeknownst to me, Hayley taped our conversation from the back seat.  I started out, “It basically means ‘why would you turn it down’.  Like if you want some Quodoba – ‘turn down for what?'”  Jim looked at me and said, “That’s about the dumbest thing I believe I’ve ever heard you say.” {Insert gaps due to belly laughing and snorting.}  I looked around at other close landmarks from which to draw, “Like if you really love Books A Million, I think you take a picture of it, put it on Twitter, and hashtag ‘turn down for what’…right?!”  Turning to Hayley. I realized she taped the whole convo, and now it’s on Facebook and YouTube.

“Turn down for what”:  A rhetorical question that means ‘there’s nothing, at this moment in time, that’s worth coming down from feeling good.’  Urban Dictionary.  (If you dig deeper, you can find a few other connotations, but we’ll leave it at that.) 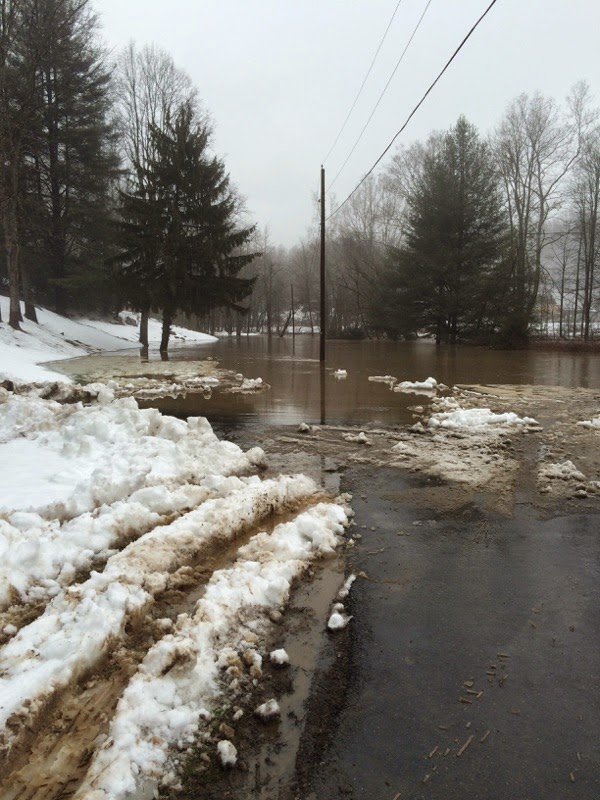 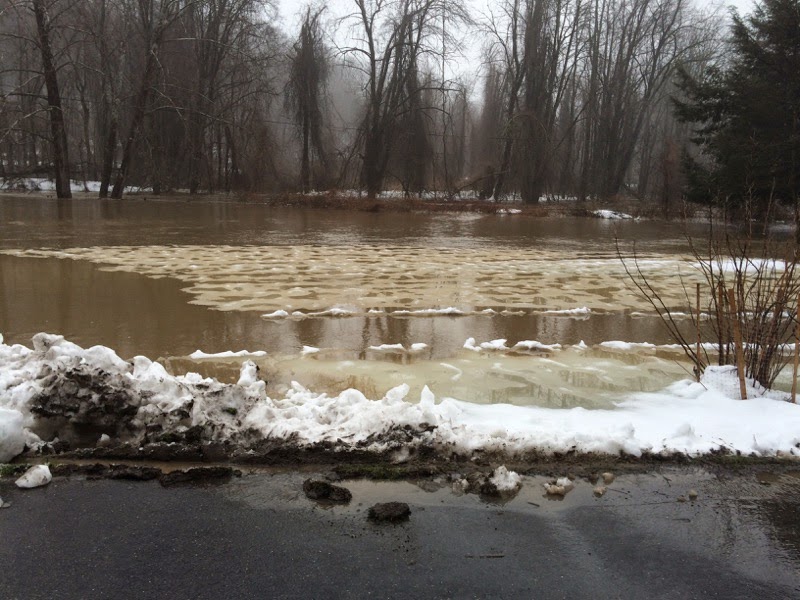 Tuesday morning we woke up to a yard full of creek.  I wasn’t even out of bed yet when I heard Jim slamming doors and getting his coat out of the entryway closet downstairs.  I wondered what was up until I looked out the window.  We don’t go anywhere when this happens because, well, we can’t. 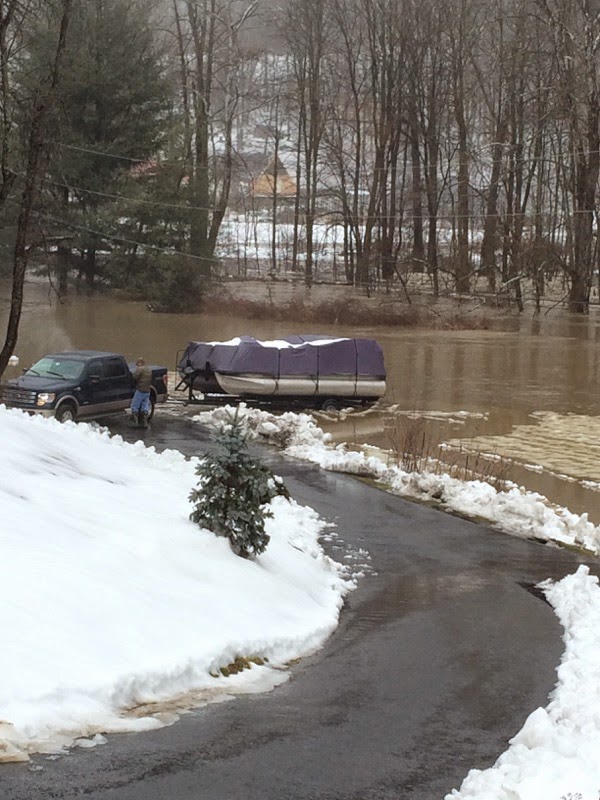 He had a few problems to solve.  Because you have to rescue the boat if you’re having a flood.  He always does this kind of thing and it makes me about have a coronary.  He got it just in time – had he not bothered, it would be sitting in someone else’s yard right now.  There are other stories from this day that I won’t tell because I’m sworn to secrecy.

Suffice it to say:  flood day is a very stressful day. 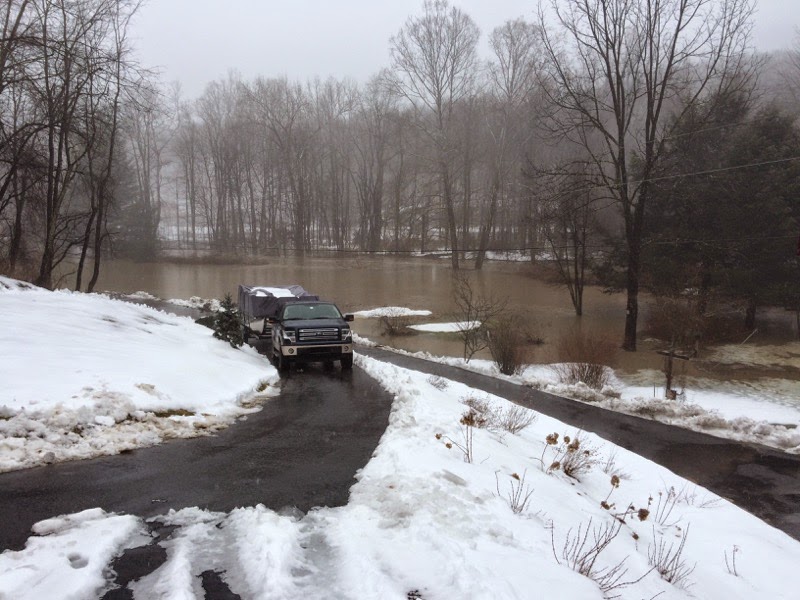 Everything worked out fine, and the girls got out of bed and ran down the hill to take pictures.  It’s what we do when it floods.  All the neighbors do too.  Then we make jokes on Facebook about putting on our lifejackets, tying our boats together, and having our own regatta.  Everybody gets to miss school and work and life slows down – until you get to clean up the mess later… 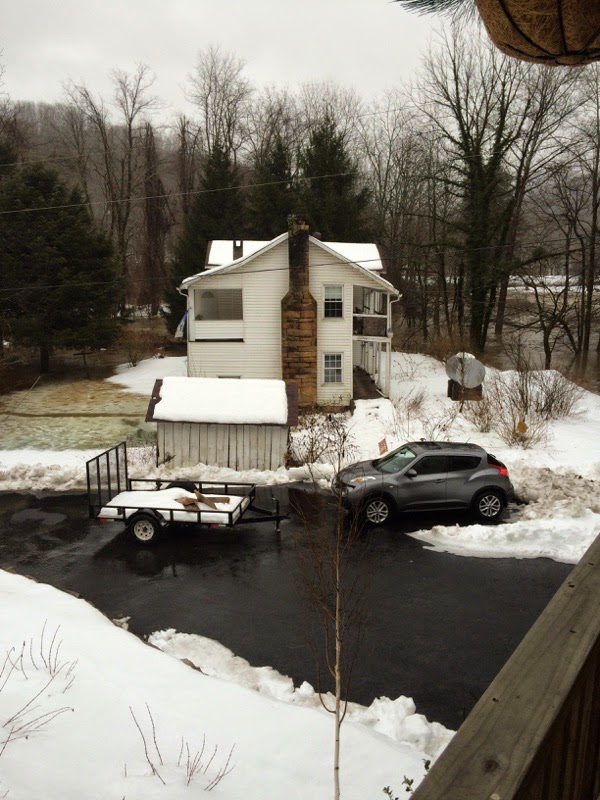 See that house?  The water from the creek is up near the back side.  My parents used to live there and one summer the water got so high that it completely surrounded their house and flooded the entire first floor.  What a mess.  This picture is taken from my front porch.  We added an apartment onto my house for them because of the upkeep of that house and the fact that it is falling apart, not to mention every time it floods they would get nervous.
That was Wednesday.  Thursday morning, 1:30 AM – I awoke with a terrible stomach ache.  I ran to the bathroom to take care of business and settle in for what I figured was a 24 hour stomach bug﻿.  Only by midnight the next night I realized this was no 24 hour thing and I was starting to fear for my gallbladder.  By this time we had been blessed with the receding of the water so that we could see the road again, only we also had another snowstorm and terrible roads on our hands.  I was reticent to waken Jim to take me to the Emergency Room, but I was worried I might die if he didn’t.
By 3:00 AM we checked out of the ER, having been cleared from gallbladder distress and declared to have a stomach virus (which could last up to 72 hours).  At least they eased my pain during the time I was there.
I suffered through the rest of “spring break”.  Today, Sunday, the day Hayley left to go back to the university, I got well.  So that was nice. 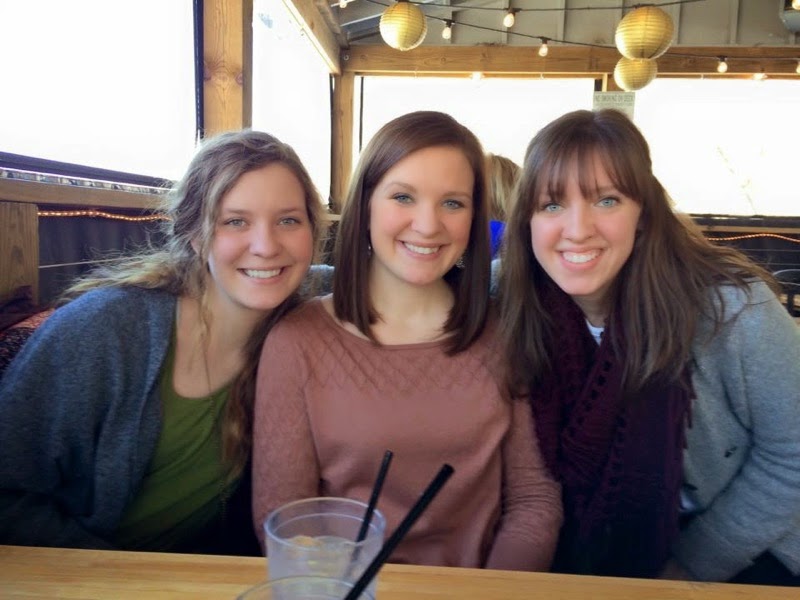 I missed out on lunch at a favorite local restaurant, I didn’t get to play any games, and there was also a shopping trip in there sometime while I was sleeping.  But, they did send me this picture, and (after some cajoling by myself) they agreed to frame it for me for Mother’s Day, so there’s that.  My girls.  They are beautiful to my soul. 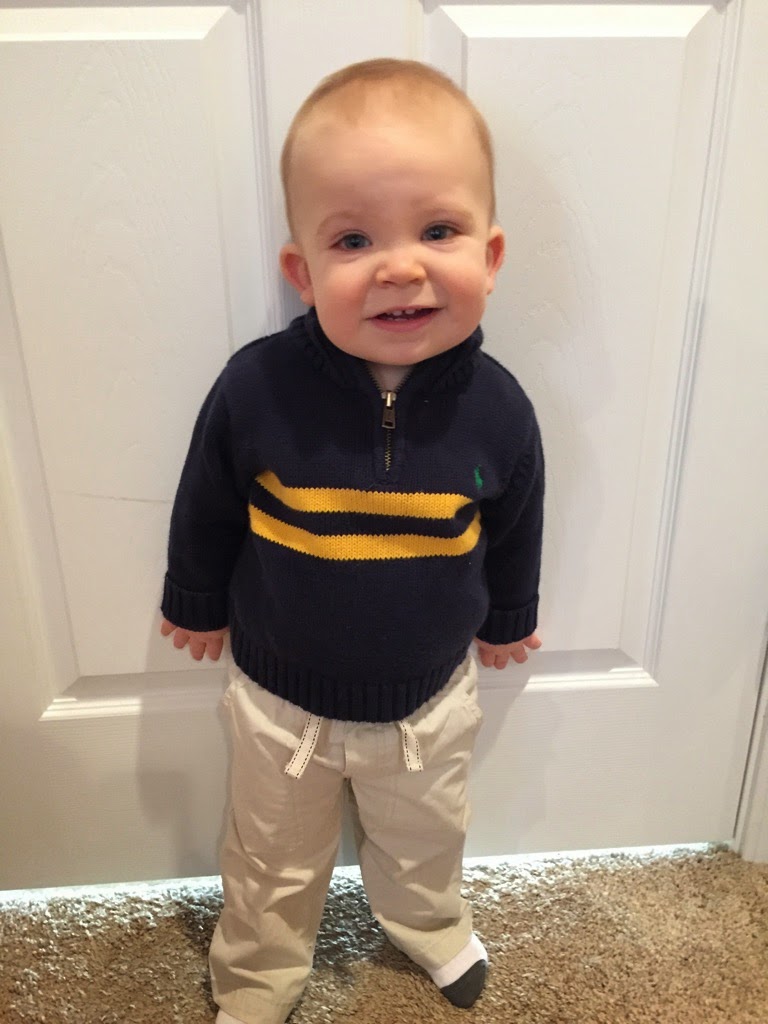 And this is Sawyer in his church clothes this morning.  He came to see Aunt Hayley off this afternoon.  “Aye-Aye!”  He yells.  “Bye-Bye!  Mmmmwwa!”  (As he blows her a kiss.)

Well that’s one spring break down, one to go.  I could do without the flood/snow/sickness next time though.  And oh – maybe a little spring weather.  One can hope.