You are here: Home / Uncategorized / Gandview Day and The Rolling Pumpkins

The girls and I make a trek to Grandview State Park every year in the fall when the trees have changed, and today was our day.  We lunched at a picnic table with deer as our audience on this sunny, but cool day.  As we munched on chicken salad sandwiches, Kylie says out of the blue, “You know that Christmas song that goes ‘but you can do the job if you’re in town’? Well, I never understood that.  Who can do the job and what is the job?!” Kylie has been asking us these  kinds of questions all her life, we just giggle and roll with it. “The parson.” I answered.  “What??? Who is the PARSON?” “You know, it says, ‘in the meadow we can build a snowman, and pretend that he is PARSON Brown.  He’ll say are you married, we’ll say no, man, but you can do the job when you’re in town’.” I replied.  “WHAT job????” She laughingly asked. “He can marry them.” I said.  “He’s gonna get married TO them, or he’s gonna marry them? Oh, he’s gonna marry them. I get it now.” She makes me laugh, that one. 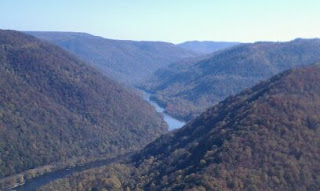 We trekked to our favorite scenic spots and snapped pictures of the beautiful mountains surrounding the winding New River.  We drove up to a bunch of turkeys hanging out near one of the shelters.  As I neared the ugly bunch, a male seemed miffed that we were moving into his territory and kicked up a few leaves before running down the hill away from us with the rest of his harem.

We walked to the top of Turkey Spur – there are a lot of steps, but the view is worth it.  Several years ago when we started this tradition, I mentioned Turkey Spur and how we were going to hike there.  After we had walked around a bit, Kylie asked, “Mom, when are we going to Turkeysburg?”  From that day on, we have always called it “Turkeysburg”.

As we neared the top of “Turkeysburg”, I pointed out a large turkey buzzard soaring over the mountains.  Hayley took a few pictures and we moved to a second set of stairs with a different view.  Out of the bushes right near our heads flew another giant turkey buzzard and I screamed and about lost my lunch. Kylie almost lost her own lunch because of laughing at me and my screaming. I hovered towards the floor for the next few steps, turned the corner, and there were two more sitting in a tree. 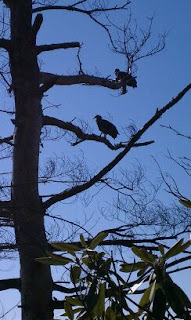 I crouched all the way back through the walkway so as not to be accosted by another one of these freaky birds.

We wrapped up our tour in lieu of purchasing pumpkins for our carving party later in the evening.  There’s a little country store near Grandview where we usually stop for this – we drove up to a bunch of caved in, rotting pumpkins.  Strike One.  We were on a time schedule – babysitting was next, but I decided to look at Sam’s because they had a nice selection earlier in the season.  We get half-way through the store and I decide to ask an employee about them.  “No, if they’re not near the front, we don’t have any more.” Strike Two. We drove to nearby Walmart – who had them in boxes on the outside of the store – BINGO! We loaded up, purchased them, and Kylie literally strapped them in the back seat belts (she knows how I drive).  It didn’t do any good – I dropped the girls off for babysitting, took an awesome ride with Aimee on the single tracks, and trained a client – by the time I picked the girls back up, the middle seat pumpkin was the only one strapped in, the other 6 had rolled into the middle isle on top of each other.

Tonight Taryn came home from work with Andy in tow – he had brought tools for carving the pumpkins, and we went to work. “Wait, we have to have Christmas music while we carve our pumpkins!” Exclaimed Taryn, scrambling to find a CD.  Does this seem strange to you? That’s just how we are, once the weather turns chilly, we use any excuse to listen to Christmas music! We had one big mess, and I whined a lot about having to scoop all that gunk out of my pumpkin.  Jim is out of town right now and he usually gets all into this with the kids while I just enjoy the ambiance.  After finally giving up on a rooster (because I wanted to be different and I collect them) I opted for a cutsie face and actually did a good job on it!
Now all we have to do is wait for the Charlie Brown Halloween special.  Which Hayley (lover of all things Charlie Brown) resolved this morning, “I can NOT miss ‘The Great Pumpkin’ this year’!” Thursday night at 8:00, people. Happy Pumpkin-ing! 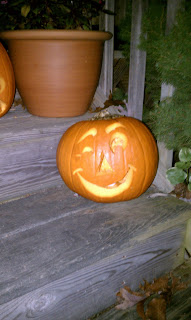