You are here: Home / Rearing / How a two-year-old is important to God 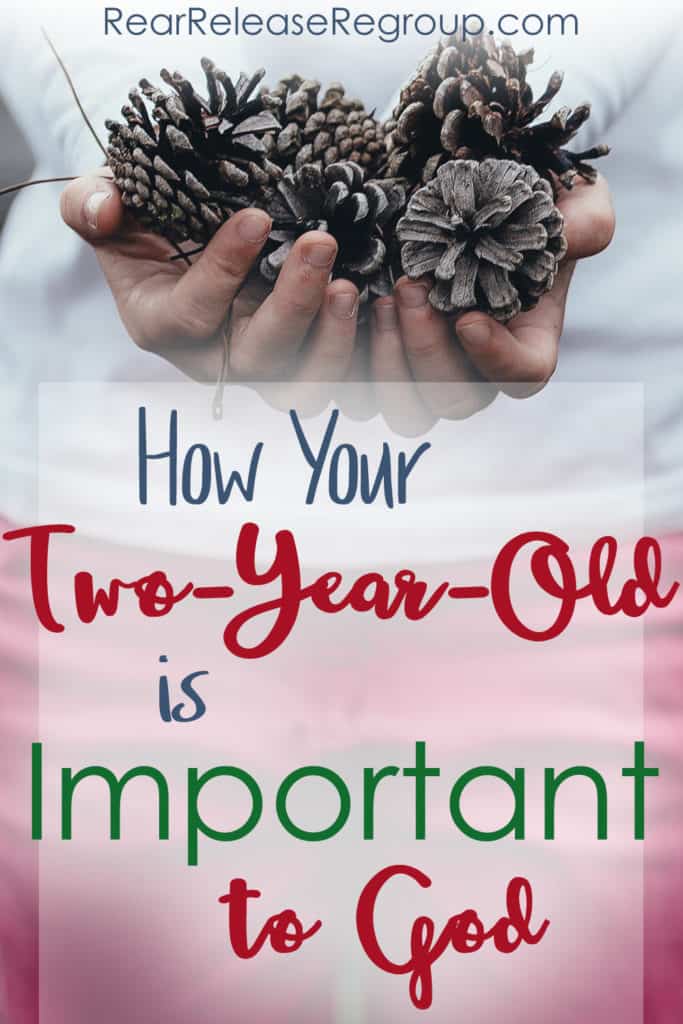 *This post contains affiliate links.  Should you choose to purchase certain advertised items, I will receive compensation, which will help keep this blog up and running!

The two-year-old Tiny Tornado runs around my house nearly every day.

I love him to the moon and back!  I am Gigi (pronounced with a French-slash-Brit accent, “Schi-Schi”), and I wear the title proudly.

But this child, my own first-born grandson, is a Tasmanian Devil in sheep’s clothing.

Seriously.  The kid can wreck a Christmas tree, rip open five gifts, and rearrange the Nativity scene (adding in his own Fisher Price people) in the span of under 5 minutes.

I’m tired just thinking about it.

But this same little boy gives hugs and kisses, talks in full sentences (genius, I know), and is cute as a button.

He can be so sweet when he wants.

But that little two-year-old boy is important to God.

Know how I know?

The Big-wigs visit the two-year-old

Now after Jesus was born in Bethlehem of Judea in the days of Herod the king, behold, wise men from the east came to Jerusalem, saying, “Where is he who has been born king of the Jews?  For we saw his star when it rose and have come to worship him”. ~Matthew 2:1-2

And behold, the star that they had seen when it rose went before them until it came to rest over the place where the child was. (9-10)

And going into the house they saw the child with Mary his mother, and they fell down and worshiped him.

Then, opening their treasures, they offered him gifts, gold, and frankincense and myrrh. (v.11)

Picture this scene, if you will, mom.

The Bible implies that Jesus was around the age of two (vs. 16)

He was no longer a helpless, adorable, cuddly baby.

Let that sink in for a sec.

How does your two-year-old react when people visit?

Probably one of two ways:

2)He’s so thrilled he shows off.

(Number two would be the way we’re rolling in Tiny Tornado land.)

Do you think Jesus hid behind Mary’s skirts?  Did he well up and cry at the sight of the Big-wigs?

Did he run around the room touching all of the things, circling ’round to scream, “RAWWWWRRR!” at the Big-wigs?

I mean sure, Jesus was holy and all, but he was still a two-year-old, for crying out loud.

When I was little, my mom used to lead the songs in children’s church.  At Christmas time when we sang “Away in the Manger”, the second verse:

“The cattle are lowing, the poor baby wakes

but little Lord Jesus, no crying he makes”

“NOOOOOOOOOOOOOOO!”  the emphatic response from the less-than-holy 6-8 year olds.

“Well then, Jesus probably cried too!”

Even little kids think baby Jesus surely made nary a sound when those cows mooed.

I don’t know if she ever convinced the rest of the class, but that thought stuck with me.

He had the aches and pains of a man.  Emotions, even.

Surely he had reactions as a small child.

Jesus was a toddler when the Big-wigs came to town. I wonder if Mary experienced a moment of panic? Click To Tweet

The mom’s reaction to the two-year-old

What do you do when your kid either:

1)Hides behind your skirt, refusing to speak, or

2)Runs around slapping his face and licking his hands interchangeably (again, true life over here)

All two-year-olds have reactions, right?

Our family ran into friends at the mall over Christmas.  They had a two-year-old who, upon being spoken to, put his fingers in his mouth and tried to melt into his stroller.

Sawyer was there too (aka Tiny Tornado).  He laughed at the friends.  He showed off his food and splashed his “dip-dip” everywhere.  He got so worked up that he choked on his beloved Chic-fil-a nuggets.  He screamed to go see Santa.

The other two-year-old remained nonplussed.  He wasn’t going to see Santa.  No way, Hosea.

The little mamas clucked and apologized for their two-year-old’s behavior.

And I just sat and giggled.

Been there.  Done that.  Got the T-shirt.

I think Mary would have felt a bit of pressure over the Big-wigs.

The best of the Orient gracing their home.

The reaction of the Big-wigs 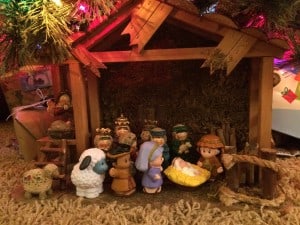 They had the loot packed up, ready to present.  The star hovered over a home, and they knew beyond a shadow of a doubt this where the young king lived.

Nevermind that the home was most likely very humble.

But Mary’s got a two-year-old either

1)Hiding behind mom, or

2)Running around half crazed (again with the licking and the growling).

They probably wondered if their gifts would not only be appreciated, but appropriate.

They probably wondered if the Tiny Tornado would try to drink the frankincense or paint the bathroom with myrrh.

I just wish I could have been a fly on the wall to see that story unfold.

But they honored this tiny {tornado} king.  They gave him all the dignity and reverence they possessed.

And, they gave him their best.

God is in our two-year-old days

Ever wonder why God didn’t wait to bring these kings later?  Why didn’t He wait until Jesus was say, in his teens, or better yet – launching his earthly ministry?

People would have taken notice then!

He didn’t wait because the two-year-old was important.

This little toddler, who was probably either shy, or out of the box, was to become the Savior of the world.

Ever wonder what what your two-year-old will become?

You play a part in that.

Your walk with God impacts him daily, whether you realize it or not.  God is working in you to mold that tiny person into a man of God.

Your two-year-old is important to God.

He is your ministry right now (along with probably a few siblings).

If you're wishing for a more important role in ministry, look at your two-year-old. Jesus was two once. Click To Tweet

If you ever get to wondering when you’ll be able to carve out time to minister to others and you doubt your contribution to society, look at that little two-year-old.

The one that’s pulling the toilet paper off the roll and tossing toys in the commode.  Throwing tantrums and refusing to eat anything but ketchup and crackers.

>>SIDE NOTE:  in case you’re feeling pressured – you won’t mess him up!

I thought that too.  I was a flawed mama with a short temper (now I’m a flawed Gigi with a shorter temper – menopause is a real thing).

God knew that when he appointed me as mama/Gigi.

And He knows you are trying too.  I have 4 points of advice for you, dear mama.

Advice from a mom who’s doing the two-year-old thing a second time around:

1)Keep laying your desires before the Lord, let Him shape your will and your flaws.

2)Keep loving on that two-year-old.

3)Be consistent in your discipline.

4)Pick your battles.  (aka lower your expectations around visitors) 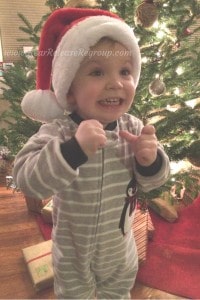 Hear me well, mom:  God is with you in this!

The very name, “Immanuel” means God WITH us.

Even when you don’t feel like it.  Even when you’re bone weary and….well, you can’t even.

Cling to the Word, write it on your heart (and several 3×5’s), pray without ceasing,

and rest during nap time.

(Not kidding about that last one.)

God’s got you, mama!

Cling to the Word, pray without ceasing, and rest during nap time. God's got you, mama! Click To Tweet 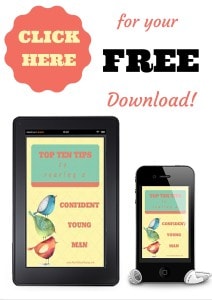 My Top Ten Tips for Rearing a Confident Young Man is free to you – just click on the picture.

You can raise your son and do it to the glory of God.  Of that, I am sure.

God is ever faithful and He places people in our paths to help guide us in our parenting journey.

I want to do that for you.

I’ve also written a guest post on Four tips to keeping your son accountable if your son is in the middle school years and beyond.  Full of wisdom for keeping a sharp eye on what your son is up to and how to wisely steer him and remain a part of his life.  We implemented these four tips regularly.

Be sure to take advantage of this free offer, and also you can follow me on Pinterest – I have a board there called, “Parenting on Purpose” that you will find of help as well!

Did you get your free Christmas gift? 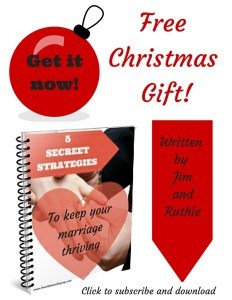 I have a new free gift for you to access when you sign up to receive my newsletter (which by the way is chock full of valuable resources, with a little bit of humor thrown in)!

Just click on this picture and it will direct you to simply fill in your email.

Thanks, and may you experience Christ’s presence in the little things this season. 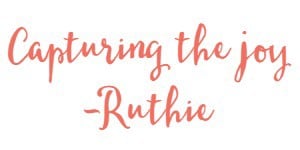 Previous Post: « How to win against mediocrity in 2016
Next Post: Why you should join me for Tuesday Talk »