You are here: Home / Rearing / Moms of sons – 3 tips for when you’re tired of putting the toilet seat down

*This post may contain affiliate links. You may view my policies here. 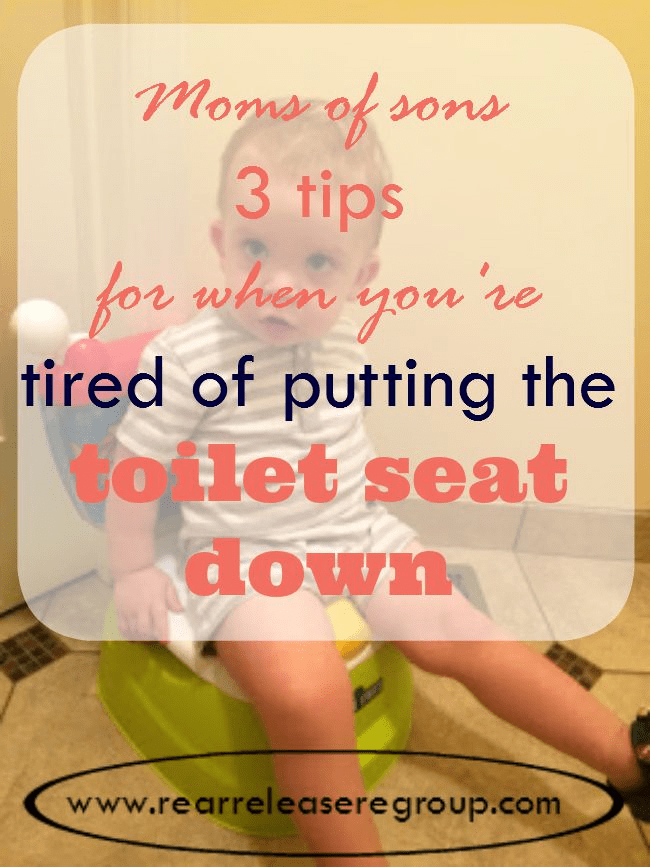 Amy glanced out the front window just in time to see her youngest drop his drawers and gleefully water her boxwood shrubbery.  Horrified, she dashed to jerk open the front door, screaming, “Pull up your pants and get in here, young man!”

The four-year-old’s smile instantly turned to a quivering lip as he hastily jerked up his shorts and slowly walked toward the oncoming wrath of mom.

At the same time, a thousand thoughts whirled through mom’s distracted brain, knowing she didn’t have to time address the unacceptable behavior (“what will the neighbors think?!”).  Her ire gathered speed as her son slinked through the door.

Moms ’round the world have been battling their sons on this, and many other bathroom related issues.  Having grown up an only child with no neighbors and few male friends, I found myself at a loss upon raising the only male in a house full of girls.

My son is now twenty-five, living on his own four-hundred miles from home, earning a living and thriving in his walk with the Lord.

How did we get from Point A to Point B?  My husband, reared in a home full of boys, gets a lot of credit for adjusting my perspective.  It took me a while to catch on to the way the male brain works, but through the course of rearing, I learned three valuable tips you need to know, young mama.

1.  Moms of sons need to roll with it

If you never grew up around boys, you may have a bit of a transition rearing your own.

“boys will be boys”

is not just a saying.  It’s real life. 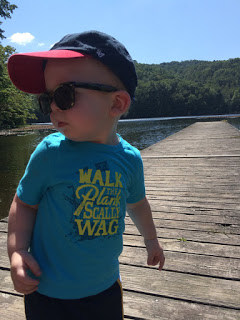 Let’s face it.  Boys are gross.

They love to talk about bathroom stuff.

Their choice of words aren’t necessarily your favorite.

Before my son even turned two he was spouting the potty humor and using potty words whenever he got mad.

I’ll never forget driving down the interstate and experiencing his melt down in the backseat over some such trivial thing as his sister taking his favorite car.  “Poo-poo!!  PEE-PEE!!!!”

My sister-in-law, Shanda, raised five boys before God called her home.  She grew up an only child in a world full of girlfriends, just like I did.  I’ll never forget her going on about her sons running around the house in their underwear and punching each other’s lights out.

But she didn’t get all freaked out.  She rolled with it.

I’m not saying let them act any way they want.  Teach them manners and common courtesies.

But let them be guys.  If you haven’t figured out yet that guys have pretty simple thought processes that revolve around 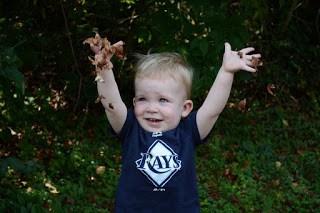 you haven’t been around guys very long.

Your son doesn’t need you to change his personality.  He needs guidance, direction, and LOTS of grace.

2.  Moms of sons need to laugh at them (and with them)

Ninety percent of the time all my son wants to do is make people laugh. It brings him joy.

A few evenings ago I had my parents over for dinner.

After most everyone had left the table and my dad was still working on his dessert, my youngest daughter pulled up a chair to pick his brain about the industrial revolution, which she is studying in one of her college classes.

As my dad began to talk about Henry Ford and the Model T, my son drew a chair over and sat between them.

During a lull in the conversation (which was apparently getting pretty dry), my son said, “Granddaddy, if all the Indians lined up on one side to fight all the Model T cars on the other, which do you think would win?”

(Picture the Indians of the John Wayne days – I know that’s where he was coming from.)

My dad, knowing his grandson and his humor (which he inherited), just chuckled, and so did everyone else in the the room. 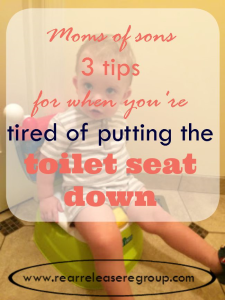 Andy, my son-in-law, lives with us right now (along with my daughter and my grandson, “Tiny Tornado”).

His sense of humor is much like my son’s and they enjoy each other’s company, neither of which grew up with brothers.

They sit on the couch and show each other dumb videos of stupid things guys do and laugh their heads off.

They watch “The Carbanaro effect” and “Impractical Jokers”.

The male brain is easily amused…

Learn to speak your son’s love language; lighten up a bit and humor him with a giggle or two.  Laughter goes a long way towards building bonds with our sons.

3.  Moms of sons need to appreciate their strengths

Don’t get me wrong.  My guys are awesome.

My son-in-law works 60 hours a week to provide for his little family.  He just completed his college degree, got a promotion, and they’re readying to move soon.  He’s also a fantastic daddy.

My son lives 400 miles away in a big city.  He works anywhere from 25-30 hours a week, attends college full time and makes top grades, and ministers in his church band every week.

My husband works around the clock, even on vacation in order to provide for us.  But he’s the funniest man on the planet, and I love that about him.

And the Tiny Tornado (number one grandson) is not far behind in his sense of humor.

One Sunday after church we sat in a restaurant surrounded by screaming, crying babies.  From his high chair, Sawyer (Tiny Tornado) took it all in, turned back around to us, performed a perfect imitation of fake crying, and then laughed about it.

Stay on your knees, walk the walk in front of him, keep him in church, and provide lots of godly influences in his life.  Develop a good sense of humor, and pick your battles.  Laugh at your son, and learn to appreciate his strengths.

The frazzled mom with the pants-dropping son took a deep breath as he walked in the door.  She decided grace, patience, and a lesson in an acceptable back corner of the yard for taking a leak was in order.

It was a compromise, and you will find compromise goes much farther than a hard-nosed approach with boys.

And the next time you go to the bathroom, make sure the toilet seat is down.

But that’s a lesson for another day… 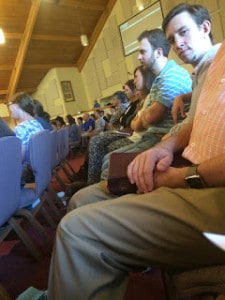 That moment when you’re trying to snap a candid of your family in church and your son notices you taking pictures with your iPhone. Thanks, son. 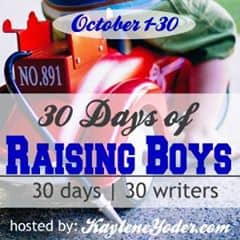 For more advice on raising boys, you may want to read 4 Tips for keeping your son accountable, part of a 30-days of raising boys series, sponsored by my friend Kaylene.  If you are raising a son, I urge you to come check out this valuable series, written by grounded, Christian moms, many of whom are my good blogging buddies! 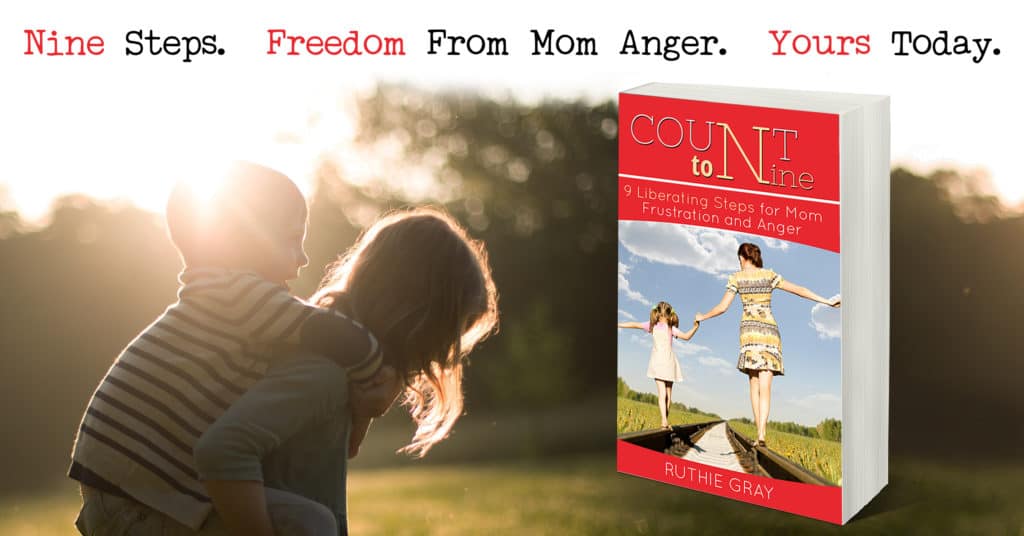 In Count to Nine, moms discover a Scripturally sound, methodical approach for taming the temper. Ruthie Gray, mother of four and grandparent of two, gently guides frazzled mothers of all ages toward God’s Word, His view on anger, and the nine steps to overcoming wrath.

In this ebook, you will learn

*The surprising reasons behind your anger

*The mind-blowing truth of God’s view on anger

*One eye-opening tactic for changing your reactions

*How the staggering power of unbelief can keep you from change

*How to triumph through one key attitude adjustment

*How to gain victory over a life-long stronghold

*And much, much more!

The author, Ruthie Gray, transparently shares her own motherhood struggles, instantly connecting with moms through her “been there” approach. Moms will find victory, new hope, and support through this encouraging method of actionable Scripture verses and Scripture prayers.

Dear mom, isn’t it time for you to Count to Nine? 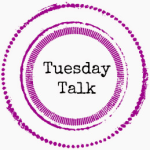 Previous Post: « How to release regret and move forward
Next Post: When the waves of same-ness turn into tides of change »