As I type this from my tiny iPhone keyboard, I’m returning home from yet another beach trip. Don’t hate. Can I help it if Hubs had business down south and I own a camper in the same general vicinity? Admit it – you would come too.

Someday I’m going to write a book of all our camping adventures. Trust me – there are enough to fill up at least one volume! We started out with a tent when our first child was 4 months old, went to the Smokies in Tennessee and had an adventure with a bear.

When the kids grew older, we acquired more tents. Next came a pop-up camper, complete with commode and shower. Let me rephrase that – the commode was IN the shower. We weren’t allowed to use the commode – it was enough to know we had one (Jim’s rules).

My husband has always been a bit of a daredevil (much to my consternation) and this sort of thing never rattled him. Neither did the time we had a blow out pulling a 34 foot camper on Interstate 81 – AKA tractor trailer heaven.

We have had a couple of near fire incidents, lost an RV in a flood, had a camper raked down one side by a mean ole tollbooth guard rail, a truck rear windshield busted by the jutting top of a 5th wheel during a sharp U-turn, and several arguments.

The last time we were at the beach on our family vacation (which was just 3 weeks ago) we decided to go camper shopping. We wanted something bigger to accommodate our expanding family (Jim has finally admitted that the kids will find mates as evidenced by the marriage of #1 child).

We found another 5th wheel, fell in love, threw all our junk out on the ground of the campsite like a bunch of gypsies, traded campers, and attracted a crowd as the new RV made its appearance on the block.

Only a camper lover will understand the common bond between fellow camper dwellers. Everyone is interested in everyone else’s roving vehicles. It’s what we do, there’s always new things to learn and inventions to appreciate in the RV world. People knew what was up when the Gray family had all their belongings on the ground. They rejoiced with us. I thought we were going to have to give tours.

Understand that we purchased this new gem right in the middle of our vaca. We spent an entire day doing this, with only one day and two nights to enjoy our new baby.

And so, who wouldn’t want to return soon and relax in the new home away from home. For you see, Jim decided a couple of years ago the arguments weren’t worth it, and so now we store the camper at our favorite family campground!

I always get depressed on the way home from the beach. I think Jim knows deep in his heart that someday he’s going to have to move me there. But for now, I will content myself with planning my next visit – I hear there’s a possibility of another business venture in August! 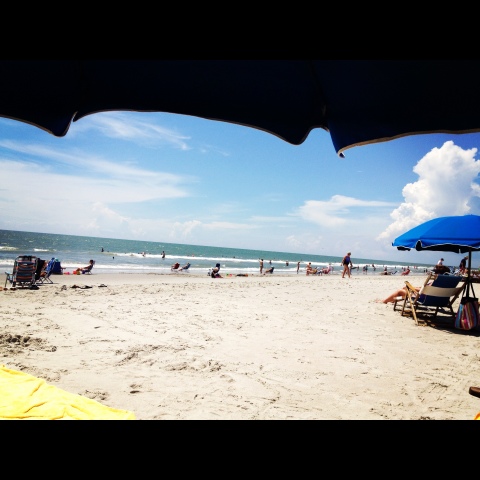