You are here: Home / mothering / A parent’s powerful words; 5 ways to speak life to your kids

A parent’s powerful words – now there’s a phrase to stop you in your tracks.

Whoever told us “Sticks and stones may break my bones, but words will never hurt me,” lied.

If we are honest, we remember not just harsh words that have been spoken to us (or about us) but we can also recall the time and place. We might have only been 4 years old…but we remember.

Words are powerful. Often they are more powerful that we even realize. If we want to grow our children in the healthiest atmosphere possible, we must recognize the power of our words and take responsibility for each and every one. 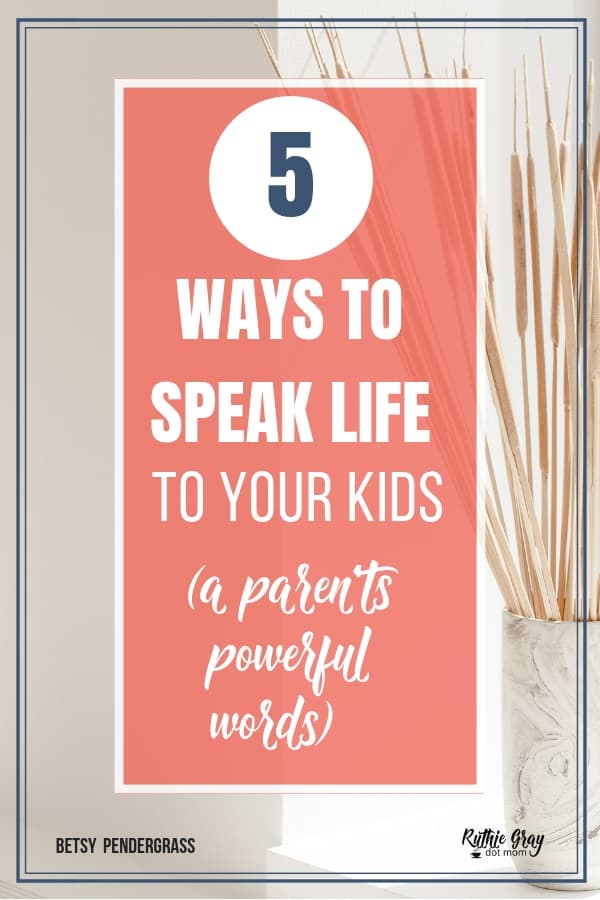 For instance, my husband, Taylor, and I were in our thirties when we began this realization. The Bible started to come alive to us, even though we both grew up attending church. We began to hear teaching about this verse:

The tongue has the power of life and death, and those who love it will eat of its fruit. Prov. 18:21 (NIV)

A parent’s powerful words can yield life or bring death. We want to be people who bring life and not death into our homes.

Were there steps that helped us begin to take responsibility for our words? And if so what were they? I began to consider how we transitioned out of these bad word habits.

Parent’s powerful words; 5 ways to speak life to your kids

1. We became aware of what we spoke (or thought)

Next, we asked ourselves if those words/thoughts lined up with what the Lord would say about the person or situation. Shockingly, we began to see how often we spoke the complete opposite of what the Lord said. Scriptures popped out at us that we never considered before.

God’s Word, which says a lot about our words, will help us choose words that bring life.

Your kindness will reward you, but your cruelty will destroy you. Prov. 11:17 (NLT)

The bottom line is, this parent’s powerful words not only hurt my kids, but hurt myself when haphazardly chosen. 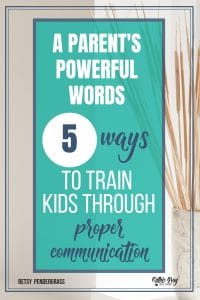 He is a slow learner

He is a terror, horrible, a nightmare

She does not sleep

My kids are awful

A parent’s powerful words speak over our children, shaping their thoughts, and children live up to what is expected of them. Why are we shocked or surprised? If a child has been told their entire life they are bad…then guess what?

They usually will be.

2. We tried the opposite of normal:  speaking truth

We began experimenting with our older two (bless them), speaking over them who they were created to be. Because God tells us who we are in Him, we were stating the REAL truth about who they are.

Taylor said, “We will speak it over them until they believe it about themselves.”

And today, I believe we are reaping good fruit from this.

Every wise woman encourages and builds up her family, but a foolish woman over time will tear it down by her own actions. Prov. 14:1

However, this was not easy at first. We were all changing; literally coaching ourselves to look for good. I homeschool, and some days, curbing this parent’s powerful words felt nearly impossible. But if I stopped and asked the Lord to help me, He always did.

Surprisingly, the kids began to act better. Not perfect, for none of us are perfect, but better nonetheless. 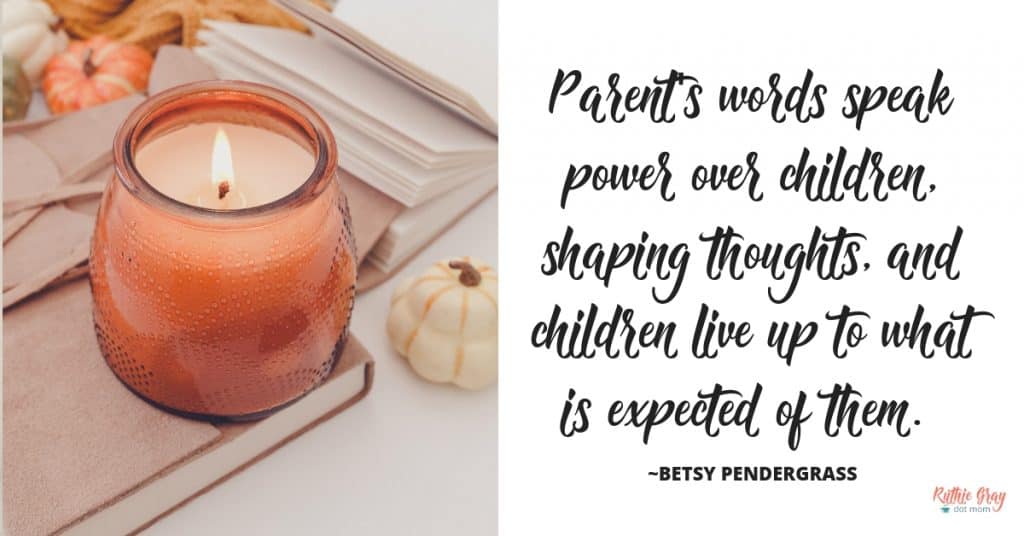 3. I asked for a time delay filter

Oftentimes, a thought entered my head and I spoke it out of my mouth. That is not a great way to live.

I began to stop and think before speaking, cultivating a filter for whether or not the words would build up or tear down. If they would tear down, I let them go.

A gentle answer turns away wrath, but hard words stir up anger. Prov. 15:1

Sometimes I chose silence. There was just not a response. And I have seen those times be some of the most beneficial in the long run. My older children sometimes returned to apologize for their behavior. I am not sure that would have happened, had I entered into the conversation armed for an angry battle. 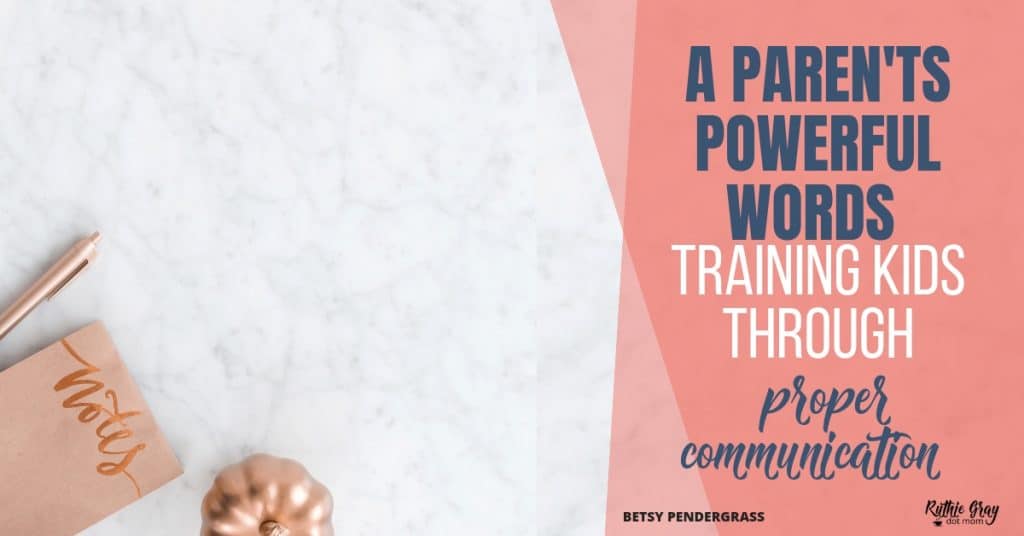 4. We developed a no-tolerance policy for our children’s words toward each other

Our kids are not allowed to verbally beat each other up, even under the guise of humor. As a family, one of our goals is to build each other up.

When they were young we taught them this verse:

And never let ugly or hateful words come from your mouth, but instead let your words become beautiful gifts that encourage others; do this by speaking words of grace to help them. Eph. 4:29 (TPT)

I adopted the same policy when leading our youth group; determining for it to be a safe place no matter what. Hurtful humor provided the victim with absolutely no recourse. If someone uses humor to be hurtful, they joke that the other person needs to get a better sense of humor – which takes them off the hook and the victim has no voice. This is passive aggressive behavior.

As a result of my policy, guess what happened? Those teenagers stopped. I intentionally helped them transition by calling them out the moment that type of behavior reared its ugly head. They knew I was serious, but I did it in love and they knew that, too. I earned their trust by protecting them.

This can happen in our families as well. We are responsible for our words AND we are responsible to teach our kids to do the same. If you or your spouse use hurtful humor, consider apologizing to your kids and for teaching them that it is ok. It may take time to stop, but it will be well worth it. 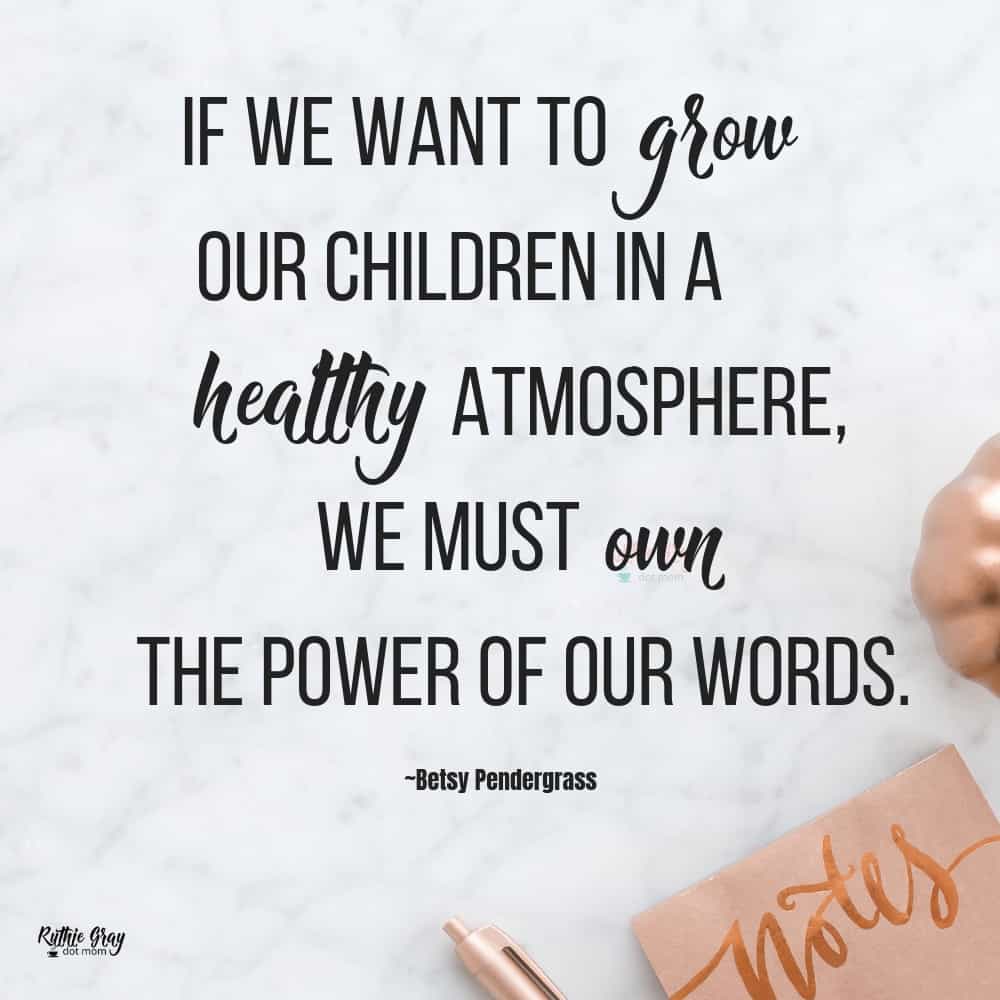 5. We teach our kids better self-talk

We do not let them beat themselves up. These conversations usually have to do with heart matters. It is important that they not believe the lies the enemy would have them believe about themselves.

Incidentally, I have to make a confession because it is good for the soul. As I was writing this post, World War III broke out between myself and our youngest. She was choosing to be in the pit and tried to drag me in with her.

It was hard and before long, I jumped in the pit too. Things escalated, and I called Taylor to pray. I stopped and we prayed together. I guided her through a prayer of apology and repentance.

But she said I need to apologize too. She was right, and so I did, diffusing the issue. Light began to filter through this parent’s powerful words, displacing darkness.

As a family, we are all learning. God offers help; all we need to do is ask.

And if anyone longs to be wise, ask God for wisdom and he will give it! He won’t see your lack of wisdom as an opportunity to scold you over your failures but He will overwhelm your failures with His generous grace. James 1:5 (TPT) 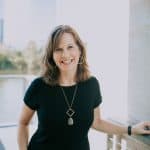 Betsy Pendergrass is a passionate gatherer of people, who just can’t help but talk about our radically good Father.   Mom of 4, she has a tableful daily.  But rarely is it just their family for dinner.  She finds cooking, writing and teaching to be life-giving, and prays that what she serves up is a blessing to others.
https://www.instagram.com/betsypendergrass/
https://www.facebook.com/betsy.pendergrass.3
Pinterest is Betsy Pendergrass-Gathering Around
https://www.gatheringaround.com
[sg_popup id=8498]