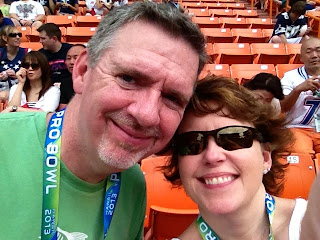 I am not an athletic person.  I don’t play sports, unless you count badminton or bicycling.  I don’t enjoy watching tennis, golf, or baseball.  But in my house, football rules – according to my husband and son, die-hard West Virginia Mountaineer fans.

I pay little attention to the games, except to notice the score and crack a joke about somebody’s last name.  I do not understand the rules, nor do I care.  Sometimes I make a cheese ball or prepare food for the super bowl and watch the commercials.  Other than that, I’m content with my Sudoku puzzles and solitaire.

A Tennessee Titan’s jersey hangs in my closet and collects dust because once I decided to pick my own team based on the color of their outfits.  In my opinion, the Titans have the prettiest uniforms, so I chose them.  I even changed my computer screen saver to the Titan’s logo, which blew my son away.  “You are really going to like a team?” he asked in disbelief.  He sat down to coach me on stats and looked up the fan page, knowing full well it was a lost cause.  Jim bought me the jersey as a joke and I pretended to know when the Titans won or lost.

This football season, my son headed up a fantasy football team and made my husband participate.  I tried to block most of this out, but what I DID learn was that we now had to watch ALL football games so we could keep up with both Nolan and Jim’s players.  And Jim told me we were having satellite TV installed “because there will be so many more channels you will like”.  Three hundred ESPN channels later…well that was almost more than the women of this house could bear!!!  The only satisfaction I got out of the whole thing was teasing Nolan about his “imaginary football team”.  It seemed to get under his skin – which was the desired effect.

Recently, Jim had business in Hawaii and asked if I’d like to accompany him.  DUH.  He purchased the airline tickets and made reservations, and then he found out it was to be the week of the pro bowl.  “Would you go to the pro bowl if we got group tickets?” He asked.  “I don’t care, it’s Hawaii, I can do anything if it’s in Hawaii, right?”  was my flippant response.

“Mom’s going to the PRO BOWL?”  My son asked, incredulously.  He even looked up from his computer to see if we were kidding.  When Nolan looks up from whatever he’s doing, you’ve got his attention.  Also, he probably doesn’t believe whatever you’re saying.

Fast forward to Sunday, January 27, 2013, the morning of the game.  I had the following conversation with my daughter who is also athletically challenged. 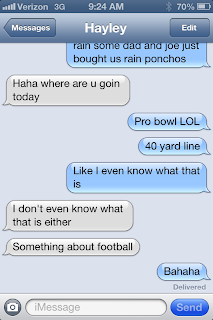 Rain was predicted so we were prepared with ponchos.  Two rows back from the 50 yard line, so close to the players we could almost touch them – and certainly yell to get their attention.  If only I knew who they were… 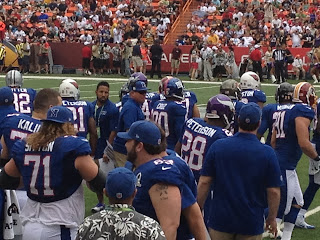 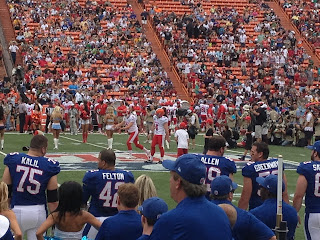 I got a bunch of pictures of people I don’t know so I could impress my son, and watched a lot of fans make fools out of themselves to get an autograph or even a smirk from their favorite football star.  They yelled the same names over and over again, “JEFF!  JEFF! JEFF!  JULIO! JULIO! ADRIAN, YO ADRIAN!!!”  Something told me I’d be hearing that in my sleep. 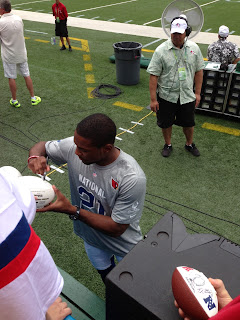 We had a guy with a cheese hat beside us and when the camera man visited our section Jim stood up and put his arm around cheese head and screamed like a maniac.  We had friends watching from home but nobody ever saw that clip, nor me in the background consuming mass quantities of kettle corn.

The two teams were the NFC and the AFC and our side was for the NFC.  “What difference does it make which team we root for, don’t they all come from the same place?” I remarked to no one in particular.  It really didn’t seem to matter anyway, all they did was run with the ball and drop to the ground as soon as a member of the opposite team came within 5 feet.  I can see why half the fans stayed out in the parking lot tailgaiting the entire time.

It began to rain, so we whipped out our ponchos, everyone donning theirs quickly – except yours truly, who used the arm hole for my head.  We shared a giggle as Jim jerked it around and set me to rights.  I can make anything look difficult.  Guess that’s why I’ll never understand football.

I could tell you about the guy on crowd control who kept listening in his pretend ear piece to intimidate fans into staying in their seats instead of hanging over the front rail.  Or describe the ugly encounter he had with the one toothed guy wearing a green bay packer’s ball cap atop a yellow hard hat (he threatened to call the police on his imaginary ear piece).  And then there was the cat fight between two women, resulting in a police search for the one that got away with her RG3 jersey sporting boyfriend.

Just so you know, our team won by a large margin (not that it matters).  And I came away with a picture representing my Titans. 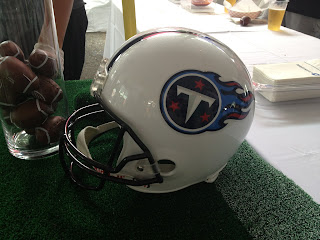 And then, I went on to enjoy Hawaii just like I’d planned.  Mahollerrrr (Mahalo)! 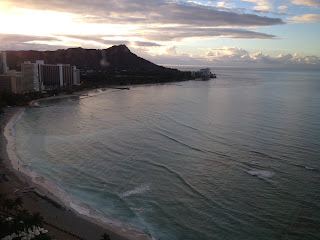