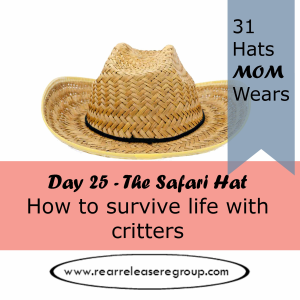 Years ago, my son had a hamster named Ray, whom he lovingly cared for and set loose to run around the house in his hamster ball.

The sisters loved Ray and took turns letting him crawl up their pant legs.

One day, Ray came up missing.

The family searched high and low in hopes of finding him safely tucked in a corner (hopefully away from the basement mouse traps).

A whole week passed with no Ray.

Except it became obvious he was paying nightly visits to his cage for dinner.

My son investigated a suspicious noise in his closet one day, and in the corner, discovered something we overlooked in our search.

Ray had built an entire domain in a giant Star Wars toy.

He had become lord and master of the third floor of the Death Star, complete with shredded magazine papers and a nice, cozy bed of cotton from a stuffed animal he’d demolished.

Ray was promptly returned to his cage with extra precautions to secure the premises and prevent any more discoveries of galaxies far, far away.

My kids owned several pets through the years.

bunnies (which no one could play with because they bit)

cats (don’t get me started)

Are you debating on a pet for your child?  If you have one, is it driving you nuts?  Are you wondering, “why bother”?

Teach your child to feed, walk, and maintain care of their pet.

This is the best way to go.

Kids learn how to care for something besides themselves (which is a good thing), and also develop a disciplined routine.

Don’t do it for them

Ask my kids if I cared for their pets and they’ll tell you  – only if they were at school or had other commitments.

Make this one of their chores.  They don’t need rewarded for feeding their pet.

The pet is their reward.

As your child cares for his iguana, he discovers it is dependent on him for survival.

This helps him begin to think of others instead of just himself (even if it is an iguana).

Unfortunately, pets die – and death is a part of life.

My son called me aside one day to check on Ray.

One look told me Ray had headed to greener pastures.

A few tears were shed round the family circle in the back yard as my 8 year daughter old sang Amazing Grace.

Dad said a prayer and laid Ray to rest in a shoe box.

I felt so sorry for my boy that day.  He had taken good care of his beloved little death star lord.

It was to be the first of many funerals in our pet tenure.

Most children want a pet because let’s face it – they’re cute and furry and small and sweet.

(Except for Roscoe the iguana.  He was just mean.)

Think back to when you were a kid – did your parents let you have a pet?

Henry the poodle was my bff because I had no brothers or sisters.

Mom and dad surprised me with the 6 week old butterball upon my return home from 6th grade one day.

Henry and I grew up together, playing, eating popcorn, and even talking our own silly language.

Henry made my life complete, and when I left home, I think he helped mom and dad adjust to the loss. 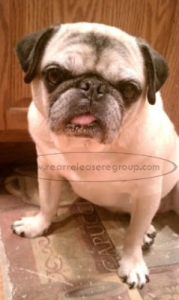 For this reason, I always knew I wanted a companion for my kids.

We tried out several pets before we found the diamond in the rough – Penelope the Pug.

Penelope had a tongue so long that it stuck out past her teeth, even when her mouth was shut.

She had separation anxiety and had to sleep next to a warm body at night.

(I put her in bed with the kids because she snored so loud.  Forget that mess.)

Many a time, my son would waken to see her lying on the pillow next to him, under the covers, just like a person.

One day, Penelope was feeling a little under the weather, so my husband took her to the vet.

“Why am I the one with the psycho dog?!” my husband grumbled.

Poor thing didn’t even have a boyfriend.

That dog provided many a chuckle for family, friends, and neighbors.

As I mentioned in Day 7: ” The Fire Helmet – Remaining alert to potential fire hazards”, Penelope once saved my son’s life during the night.

Roscoe the Iguana had started a fire in his cage by sitting on top of his lamp, mashing the shade onto the bulb.

Penelope’s yelps woke us even before the fire alarm sounded.

Stupid iguana. (He didn’t even die.)

Another night, my son had an asthma attack, and the dog’s bark alerted us again.  If it hadn’t been for her, we may not have gotten to him in time.

She saved his life twice.

“No matter how much cats fight, there always seem to be plenty of kittens” ~Abraham Lincoln

The older I get, the more I realize what a pain pets can be.

Dog hair everywhere, the occasional vomit or poop explosion, and sometimes they don’t smell so good.

Penelope passed on to glory 4 years ago and I just found another pug hair yesterday. 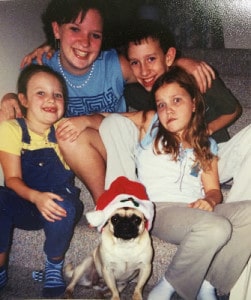 Here’s another tip: the dog picks a favorite, and often times, you’re it.

If I got out of her sight, she panicked.

She even stalked me outside the bathroom door.

And she’d run in circles, snuffling and snorting, until she sniffed me out.

It was almost like having a toddler all over again.

I did realize something the other day, though.  Now that may grandson (Tiny Tornado) is living with me temporarily and the floors are crumby and sticky 90% of the time, I’ve found myself missing Penelope the Pug.

Because the minute food hit the floor, she was on it with her cat-like reflexes.  (Pardon the pun.)

It was because of her that my floors were never dirty.

So go ahead, mama.  Get your kids that coveted pet – once they’re old enough to care for it.  Yes, you’ll be annoyed, and yes, you’ll get stuck holding the dog dish on more than one occasion.  But your pet will endear itself to the family and you will develop many fond, comical memories for years to come.

Even if you have to put on your safari hat in search of a death star lord.

Previous Post: « Day 24: The Thinking cap – How to make wise decisions amidst every-day mayhem
Next Post: Day 26: The Swim Cap – 5 ways to sneak in exercise and still have a life »