You are here: Home / Uncategorized / WHATCHA GONNA DO WITH ALL THOSE TOYS, MOM?

What mom doesn’t get tired of toys strewn all over the floor?  Leggos and Barbie doll shoes – not very foot friendly if you happen to step on them, tonka trucks and play school shopping buggies – even harder to maneuver around.  How do you get kids to keep it tidy?  Where do you put it all, and how do you decide how much is too much to allow in the family room?  Oh, the messes kids make, and oh, the guilt mamas have over picking and choosing which to tackle first and which to let slide. 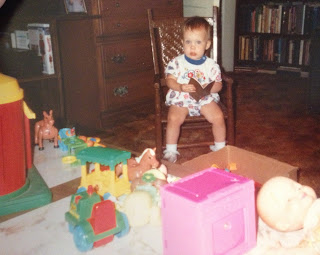 I’m not here to tell you I have a simple solution.  Sorry, you’ll have to go somewhere else for Smiling Sally’s Six Simple Steps to Solving Sloppiness or some such other catchy organizational tool to whip your house into shape.
This is just about a couple of creative things I did to spur my little angels into clean up mode.
REGULARLY DITCH TOYS
About every 3-6 months I went through all toy boxes and pitched broken and mismatched toys.  Thank GOODNESS for broken and mismatched toys!!!  I kept a trash bag and worked each day until I was finished.  Do not do this in front of your kids, you will only receive backlash and guilt trips.  Trust me – they will NEVER miss this stuff!!!  I always felt so much better once this job was done.
ROTATE TOYS
After the purging, I selected a few toys to stow on the top shelf of the closet.  Note:  always cover these with blankets or something that will not draw attention to said toys.  If they see them, they will want them.  If they don’t see them, they will forget about them until you present them later – and then they’ll be NEW toys! 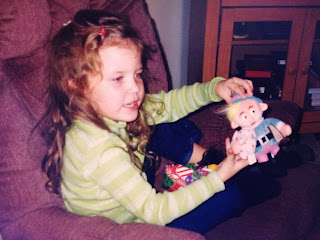 GIVE AWAY TOYS
Someone once told me that all any kid really needs is 7 toys (that’s seven).  That would be nice, except  grandparents will never buy into that.  I’ll put myself in that category right now because when my little grandkid arrives in about 6 months, I’ll be right on the doting bandwagon.  Just choose a few duplicates, or toys they never use, and tidy them up.  Then give them to a church nursery, good will, salvation army, a set of grandparents who may need a few toys to keep on hand when grandchildren visit, a children’s home, or a family in need.
MAKE YOUR KIDS CLEAN UP THEIR TOYS
Plain and simple, when they’re done, make them put the toys away.  If you have to dash out somewhere and the toys are still out, budget time in your evening before bed for the kids to get it done.  Some parents have their kids put each toy back when they’re done.  That’s a nice thought, I never could bring myself to be that OCD about it because I realize that kids go back and forth between toys.  We always sang the Barney song, “Clean up, clean up, everybody everywhere, clean up, clean up, everybody do your share”, or sometimes I would just make up a silly song to get everyone going.  Another fun idea is to save a favorite CD just for this purpose, or just crank some loud, fun tunes on the radio.  I usually helped them get started, or pitched in with the younger ones to teach them, but as the kids grew I left this job to them.  It is said that a child’s play is their work.  I say if they get to enjoy their work (toys), they  need to be taught responsibility as well.  As soon as a child is old enough to understand, teach him to pick up a toy and put it away.  With age comes responsibility.  Who’s going to teach them if not you?  Do you want them to leave a mess when they’re visiting somewhere else?  I think not. GET CREATIVE
One time I got so sick of stepping on toys in the play room that I instituted the “Black Hole”.  Whenever the kids left the play room a wreck for more than a day, whatever was on the floor got sucked up in the black hole and they didn’t get to see that toy again until the next week.  No one ever saw the black hole, but it was rumored to be a large box on the top shelf of the play room.  My oldest wasn’t especially fond of the black hole, so just threatening about it got results.
DESIGNATE A SPACE
I liked having a play room, but more often than not, we did without and the play room was just the kid’s room.  Sometimes I would place a toy box in the corner of the family room and let the kids only have enough toys that would fit in that box – the rest went in their room.  After all, if mom and dad are in there chilling, the kiddos eventually migrate there as well.  I was ever so glad when we were out of that phase and they didn’t drag everything in there.
KEEP THE FIRST ROOM/ROOMS IN YOUR HOUSE CLUTTER-FREE
This was probably my most favorite rule to employ.  The first impression of a house is the entryway, right?  I always tried to make the rooms that were within view of the front door clear of clutter and toys.  It didn’t always work (sometimes husbands break rules too), but it was something that gave me comfort – the fact that I had a handle on at least one room in the house all the time!  I tried to have a candle burning or potpourri going to set the mood and at least give the appearance of calmness.
THE BABY DOLL THAT NEVER RETURNED FROM THE BLACK HOLE
My daughter had 3 favorite baby dolls.  One of them disappeared and I really think it was due to a move (we did that 7 times during the first 10 years of marriage), but she never forgave me for losing that baby, and she blames the black hole.  This does occasionally happen –  you lose a special toy, or you lose a toy that your kid all of a sudden deems special just because they remembered that it’s lost (otherwise, they’d leave it lying on the floor until the black hole sucked it up again).  In return for my 6 year old’s chastisement of my neglectfulness, I named it “Baby Lost and Gone”.   I thought it quite a clever name, but she hated it.  Thus, every time she berated me for losing it, I’d speak of “Poor old Baby Lost and Gone”.  It shut her up, but she never forgave me.
You may have to face this difficulty yourself one day, parents.  Trust me, you’ll be able to look yourself in the mirror without having a whole lot of regret.  It’s worth it for a few moments of sanity!!!

Previous Post: « The “perfect mom” myth; How to parent practically
Next Post: How to see the world through grandma’s eyes »