My whole body hurts from a ride yesterday with my good friend and biking mentor, Aimee. This girl is the bomb on a bike!!! We rode single tracks, of which I am an amateur. I tried last year and stunk at it, so I backed off and gave the whole biking concept a little more time. I had no idea what all was involved when the guy at the bike store asked me if I wanted a road bike or a mountain bike. I chose the latter, but very soon learned I was better on pavement. Eh, I stuck with it, and here’s where we are today.

If you’ve ever done single tracks you know they are not for sissies. When I came into my 40’s I decided I was tired of being a sissy and it was time to face my fears. I started riding roller coasters, talking to people I didn’t know (yes, that’s a legitimate fear), and riding mountain bikes.

For someone who is decidedly balance challenged, mountain biking can present a problem, especially when you have a narrow curve on your left and a tree two feet over on your right (the object is to ride between the two). After that is a downward slope, followed by another sharp turn, jutting rocks, and a pointy hill (sort of like a drop). You gotta watch those pointy hills – your pedal can get caught on them and send you flying. Which did happen yesterday.

You ride up, down, around, through, left, right, jump, climb, down and over these humps they call “whoop-de-doos”. You are in what is called “attack position” – alert, bent knees, hovering above the saddle, head up. (My back and arms are sore today because I was overkill on the attack position.) This is truly a total body work out that sends the adrenaline pumping and the heart rate through the roof!!!

That doesn’t count all the falls, either. I wrecked no less than ten times yesterday. Not at the beginning – I did really well starting out, even though I was enveloped with that familiar sense of dread (which I would liken birthpangs – you know you’re in it too far to escape) as soon as the trail narrowed, leading to switchbacks and quick drops.

Ironically, its when your arms weaken that your biking experience starts to dive. Don’t for a second think biking is all about the legs, because something’s gotta keep control of the steering, and there’s some quick thinking involved here as well!

That’s when I had the first wreck of the day. I rode down a rugged ditch which abruptly rose to a hill and through a narrow gap between a rock and – guess what – a tree. Because my arms (and brain) were slow on the draw, after the rise I didn’t clear the rock fast enough, bounced my pedal off and catapulted to the other side, clearing the tree (thankfully), and landing on my left side in some brush. That one was hard to come back from because my bike was on my leg and I was already weak. I tried to be quick though, because I’m always leery of snakes in the woods (Due to a rattlesnake experience last year while biking). I dragged myself up, checked out the bike, just turning it over when Aimee came riding back to check on me. Don’t worry, I insisted on her leading and not hanging around, she didn’t desert me. This girl can ride circles around me so she could go back and forth to the next landmark 2-3 times before I would ever get there!

For some reason its protocol for bikers to ride with the seat way up so when you push off, you lift yourself up onto the seat. It took me forever to get used to this concept, and when I’m tired and my arms are noodley, I can barely get back on the thing! My first try was unsuccessful – I got my rather largely padded bike shorts caught on the front of the seat and promptly fell into a skinny, but sturdy, tree to my left. Sheesh!! I tried again, got a little farther, and fell off again maneuvering around a curve and up the hill. Here came Aimee – “I’ve had two wrecks since I last saw you!” I declared – it must have been all of five minutes. I ended up alternating walking/riding because there were more falls of different varieties, usually ending up catching myself by tipping to one side, thank goodness!!! We ended with several Whoop-De-Doos –
those were fun – then a big hill, and a couple more very tight curves where it looks like you have the option to ride up around the side of them (like motorcyclists). The first one I walked through, the second I tried – halfway through I just stepped off of the high side of the bank (it was the height of my hip).

I dreamed about bike trails all night. I’m bruised, scratched, sore, and scabbed, but guess what – I’m hooked! “why would you keep doing something that hurts you?” You may ask. Because I truly enjoy this, its a great way to work out, and I’m not giving into my fears any more. Sooner or later ya gotta start living. I’m living my life NOW. So let me ask you – what’s holding you back? 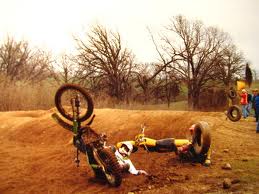 Whoop-De-Doo:  A series of up-and-down bumps, suitable for jumping.  (That’s not me in the picture, by the way.)